The Connacht revolution rolls on with win over Toulouse 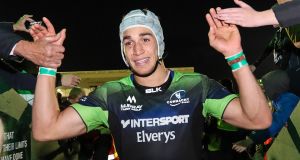 Ultan Dillane is congratulated by fans after Connacht’s win over Toulouse in the European Rugby Champions Cup Round 1 at the Sportsground in Galway. Photograph: Billy Stickland/Inpho

The Connacht revolution deepens. On another night of giant strides in the Sportsground, Pat Lam’s squad unveiled its latest spectacular demonstration of how to shrug off adversity with a dramatically staged felling of European gods Toulouse.

A crazy, wonderful game ended 23-21. Actually, it ended with the home team executing a nerve-wracking game of keep ball deep in their own 22 for the last two minutes of the match, when any mistake would have meant curtains. The seconds ticked and Toulouse, four-time European champions, were powerless against a display of sure hands and true faith. The capacity crowd, fast becoming the most boisterous in rugby, shouted down the last 10 seconds as if it were New Year’s Eve in Times Square.

“There are so many highlights but the biggest for me is how far we have come as a team since we last played them three years ago,” beamed Lam as the locals hung around the stadium for a full hour on a gorgeous October evening, reluctant to leave the moment.

Tiernan O’Halloran was again breathtaking in the back line and Bundee Aki dashed through a Toulouse gap for the decisive 67th-minute try. Craig Ronaldson, just returned from a six-month lay-off, hooked a brilliant left-footed conversion for the lead. It was a good way to say: I’m back.

Connacht made a lie of the belief that the scrum is the platform for any winning rugby team. Toulouse floundered here despite owning the scrum. Connacht’s front three of Finlay Bealham, David Heffernan and Conor Carey conceded significantly in weight and experience to the French front unit, and the home scrum was squeezed for three converted penalties within the first 10 minutes. Connacht’s solution was to avoid a scrum situation. Against their will, Census Johnston and Christopher Tolofua were given a whirlwind tour of the Sportsground. They lasted little over 40.

“A great example was the end there when Connacht killed two minutes off the clock. They stuck to what they did and did what they did: put four guys either side of the ball and locked down the ruck.”

Flood had been to Galway before, in his Newcastle days, when the Sportsground was still the Bleak House of rugby homes. He must have been struck by the transformation of the venue, even if he was well aware of the ability within the contemporary team. Toulouse were not surprised by what Connacht did here. The local delight was understandable but once John Muldoon shut the changing room door, the review matched the mindset.

“There was no delirium inside. . . I’ve been in a changing room and you’d beat a team maybe not with the same tradition and there would be absolute delirium. I think we have come a long way. We left multiple opportunities out there and we can get better.”

Fears that last season was a fabulous detour into fantasy are already passing. Six games in and Connacht are looking like their old new selves.