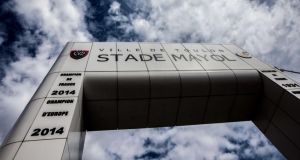 Leinster will travel to the Stade Felix Mayol in December to play Toulon. Photograph: James Crombie/Inpho

Paul O’Connell will face off against Leinster in Toulon colours at the Stade Félix Mayol in the Champions Cup round three tie on Sunday, December 13th.

Toulon were previously unable to reveal where they would host the tie, without the say so of their owner Mourad Boudjellal, leaving a gap in the fixtures released last week.

Toulon’s home ground Stade Mayol, where the three-time champions are all but unbeatable, only holds 15,400 meaning a move to Nice or Marseilles had looked likely.

The EPCR have accommodated this fixture with a Sunday date, and 4.15pm kick-off, to avoid a clash with the French soccer clubs who usually reside at these stadiums.

The return fixture six days later (Saturday December 19th) is in the Aviva Stadium, where O’Connell will be sure to receive a warm reception upon his return to Irish soil.