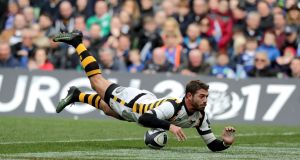 Wasps’ Willie Le Roux appears to score a try in Saturday’s clash with Leinster, but it was disallowed by referee Nigel Owens. Photograph: Morgan Treacy/Inpho

Le Roux ran in for what looked like a legal first half try in the quarterfinal match, but instead of conservatively touching the ball down he decided to showboat with an aerial dive over the line.

When coming in to land the talented but foolish South African appeared to lose control of the ball and did not correctly apply downward pressure.

Instead the ball fell from his grasp inches from the ground and as Sexton pointed out to Owens, it nullified the score.

But Owens had not seen the ball slip from the arms of the Wasps’ fullback and was all set to award the five points, until Sexton stepped in to remonstrate and ask for the TMO to have a look at the video review.

Seán O’Brien, along with most others involved, believed the try was legitimate until the slow motion replays showed that Sexton was absolutely correct and Le Roux had indeed dropped the ball just before impact.

“I was cursing at the time, saying for f**k’s sake,” said the Leinster and Ireland flanker O’Brien. “Then Johnny said to Nigel to check it. He wasn’t going to check it . . . It came up on the big screen then and I said ‘he’s after dropping it, yeah’.”

Far from approving of such displays of showboating, O’Brien’s down-to-earth thinking and lack of ego leaves gives him a hardline view on the incident and little sympathy with Le Roux’s foolhardy blunder. Given the scoreline, the mistake by the Springbok was almost unforgivable.

“I wouldn’t have any sympathy for him anyway,” says the backrow forward dismissively. “Look, I wouldn’t be a big fan of lads diving in or stuff like that. Just put the ball down.

“He could have just touched it down. He didn’t need to do it.”

England winger Chris Ashton was a big fan of taking to the air going over the line, a trait that fans loved and hated in equal measure, coming with it no small hint of arrogance.

With the English side trailing by eight points, it took some brilliant footwork from Kurtley Beale to put Le Roux clear and through with no Leinster players near him. The 27-year-old was also making his European debut for Wasps.

“It’s a bit like everybody talking about the times [Chris] Ashton does those swan-dives, it is tricky because it changes the complexion of a game quickly,” added O’Brien.

“It would have brought them into the game more. We had an awful amount of pressure on them at the time, so it kind of would have swung it back a bit to them for a period.”

Owens awarded Leinster a scrum, from which they won a penalty and cleared their lines, which injected huge negative energy into the Wasps side and stopped any momentum shift that could have had consequences for Leinster’s good outcome. Leinster then scored two tries that effectively took Wasps out of the game.

“Yeah, it was like if Le Roux touched that down they were back in the game,” added O’Brien. “It would have made it 8-7 at the time. A big moment.”

O’Brien also praised the younger players who have almost totally regenerated the team. From the 51-10 whipping given by Wasps in round six of last year’s tournament just three players, Sexton, Jack McGrath and Devin Toner started for Leinster at the weekend.

“Ah, they’re very good players,” said O’Brien. “They can be unbelievable. Your know, you look at Dan (Leavy) there, he’s developed incredibly quickly over the last year and he’s only going to get better I think. It’s the same with Josh (van der Flier) and Jack Conan, these guys are only coming into themselves now.”

The entire backrow was different last season with the injured number eight Jamie Heaslip starting ,with Jordi Murphy at openside and Dominic Ryan at six.

“Yeah, well that’s what I meant by the squad I suppose, it has developed a lot over the last year,” added O’Brien. “Again, those lads were kind of – all those new guys that came in and the younger guys and a few new signings obviously – developing away last year. This year they’ve really stepped up to it and they’re getting more opportunities and have grown as people as well”

1 Next stop the Champs-Elysées in green for Sam Bennett
2 Born to ride, born to win: Sam Bennett, the making of a green machine
3 Let’s face it, Saracens don’t really care that they are rugby’s most hated team
4 Donegal footballer tests positive for Covid-19 forcing squad into isolation
5 Leinster look ready to step things up and burn off Saracens challenge
Real news has value SUBSCRIBE

Superior Germans get job done to take top spot from Ireland 16:33
Next stop the Champs-Elysées in green for Sam Bennett 16:07
Donegal footballer tests positive for Covid-19 forcing squad into isolation 15:30
Everton come from behind to put five past spirited Baggies 14:57
Aston Villa sign ‘immense talent’ Bertrand Traore from Lyon 11:48
Crossword Get access to over 6,000 interactive crosswords