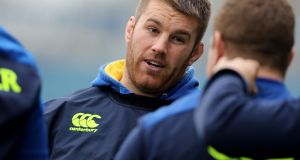 Leo Cullen spoke of his secondrow and how it was now one of the most competitive areas of the Leinster team, Hayden Triggs and Devin Toner the pair to start against Northampton today. Seán O’Brien was sitting beside him to his left and didn’t flinch.

But the wheels in O’Brien’s head may have been whirring and a glance at the team sheet would have told him a different story – that backrow competition is harder and more brutal at Leinster than most other positions.

O’Brien returns to a travelling squad after time out with a hip flexor injury and is among five backrow players and just two specialist locks picked by Cullen for the trip to Franklin’s Gardens. Jamie Heaslip and Josh van der Flier start with O’Brien, with Rhys Ruddock and Jack Conan on the bench.

There is such an availability of talent in the Leinster backrow, including the injured Jordi Murphy, Dan Leavy and Dominic Ryan, that Cullen must have a challenge keeping them all purring and satisfied with rugby life.

Conan, who played number eight last week in Leinster’s Pro12 win over Newport, where he won man of the match, can line up as a lock having done so before for Leinster.

“A couple of years ago we played a game against Edinburgh when we lost two secondrows in the first five minutes of the game. Highly unusual situation,” said Cullen. “Mike McCarthy and Tom Denton both gone in five minutes and Jack played 75 minutes in the secondrow.

O’Brien comes back into the heart of the team with an admiring eye on blossoming van der Flier. In his own way, O’Brien set the bar so the younger player could gaze up and learn.

It didn’t take van der Flier long to convert his wonder into performance and impress Joe Schmidt. Now O’Brien is in part feeding off the younger man in the endless cycle of placing a foot on the pitch, staying healthy and holding the shirt.

“He’s been unbelievably consistent; some huge performances. Not just this season, but at the end of last season too,” says O’Brien of the 23-year-old openside flanker

“So, he’s been keeping the heat on the whole lot of us, I think. He’s a great professional as well and someone who is only going to get better.

“He just does his job, he doesn’t make any mistakes, he knows his detail and his work rate is incredible. He’s a big part of this team now.”

O’Brien comes in after missing out against Australia last month. The Ireland backrow that day was Heaslip and van der Flier with Munster’s CJ Stander. For all of that disappointment, it has still been a tough November on the body and while O’Brien was close to playing, he was not quite 100 per cent and that can only ever mean one thing to a player – off the pitch as well.

“It’s just the way it goes. I probably had emptied the tank the week before, so I was playing catch-up recovery-wise all that week. It was only a small thing, just kept me out for a few days.”

Rarely is there an upside to injury. O’Brien’s abrasive and often inspiring play as well as his selfless intentions on the pitch means he is a wrecking ball, but also constantly exposed to the threat of tendons and ligaments giving way.

While the frustration of being on the sideline is a dreary reality of professional rugby, O’Brien faces Northampton and their returning England players, captain and flanker Tom Wood among them, with a freshness he may not have otherwise had.

“Yeah, definitely, very fresh this week,” he says. “Had a good week last week as well, got a lot of training under my belt and feeling very fit and back to myself the last few weeks and feeling excited. You want that bit of confidence.”

It’s good that he feels his eyes are bright and his step light. Today he has a number on his back and starts. For O’Brien and the queue of Leinster flankers behind, that’s as much as they ever want.