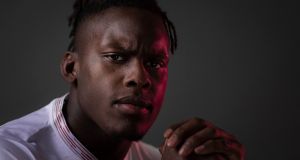 Saracens lock Maro Itoje says he is aware of the significance of Saturday’s clash with Leinster. File photograph: Getty Images

England and Saracens lock Maro Itoje says he hopes to spend at least one season overseas to broaden his horizons and experience a new challenge.

Itoje, who made his debut for Saracens in 2014 and has played a part in their three Champions Cup and four Premiership successes, committed his future to the team in July despite their relegation to the Championship.

“At some stage in my life I would love to play abroad,” Itoje told British media. “I’ve had a great life and I’m very privileged to play the sport I love and experience the things I have experienced.

“But experiencing a different culture, different style, I’ve more or less lived in north-west London for the majority of my life. It’s a lovely place to live but it would be great to experience something else further down the line at some point.

“I don’t really want to pigeon-hole myself into a specific region but when the time is right I’d love to spend at least a season somewhere.”

Saracens, who have been demoted from the Premiership for next season for salary cap breaches, face Leinster in the European Cup quarter-finals on Saturday in a repeat of last year’s final.

Itoje, 25, is aware of the significance of the contest.

“I don’t have a fear of failure but it does highlight the importance of this event. We don’t have next season for the Premiership or the European Cup, so it’s important to want to do well and succeed,” he added.