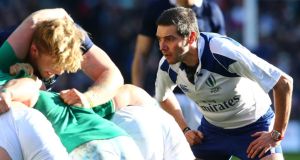 Jérôme Garcès will referee Leinster in the Champions Cup for the third time this season having previously officiated when the Irish province lost 24-18 to Harlequins at The Stoop in Round Three and drew 20-20 with Wasps at the Ricoh Arena in Round Six.

In examining both the number of penalties that the French official awarded and also assigning them to various categories of offences, there is one figure that is germane to his interpretation of the laws. In the two aforementioned matches 70 per cent of the penalties awarded went in favour of the attacking side.

Garcès has been more sympathetic to the manner in which Leinster contest the tackle/ruck area as the Irish province forced Harlequins to concede eight penalties and Wasps six, as against Leinster’s four on each occasion. It’s an area that’s going to be crucial when considering that it represented over 50 per cent of the penalties that Leinster conceded (12) in those two matches out of an overall tally of 21.

The scrum is an area in which the Frenchman takes a firm hand if he considers one side to be in the ascendancy as Harlequins demonstrated at The Stoop when forcing the visitors to offend four times according to the official’s view of that facet of the game. Leinster’s scrum technique against Wasps was a great deal more to his liking.

The French referee was also pretty prolific in spotting foul play in both matches, a category that comes under the striking/kicking/taking out in the air/crossing or non-technical offences.

For example Leinster’s three transgressions in the match against Wasps in that category were: a yellow card against Kane Douglas for not using his arms in a tackle, Dominic Ryan for crossing and Devin Toner for tackling a Wasps player without the ball.

Finally there is one other trend that is evident from the matches in that Leinster conceded five penalties in succession from the 30th-44th minutes of the game against Wasps and also had a run of five consecutive penalties awarded against them in the Harlequins match. As the visiting side Matt O’Connor’s side gave up fewer penalties in both Champions Cup matches listed above.