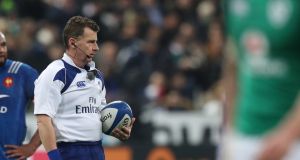 Two of the top officials in world rugby, Nigel Owens (Wales) and Frenchman Jerome Garcès will referee the Irish provinces in their Champions Cup quarter-final matches. Romain Poite (France) will preside over Connacht’s Challenge Cup quarter-final against Gloucester at the Sportsground.

Owens will officiate for Munster’s Champions Cup quarter-final against three-time tournament winners Toulon at Thomond Park on March 31st while Garcès will be the man in the middle for Leinster’s knockout game against the two-time and defending champions Saracens at the Aviva stadium on Sunday, April 1st.

England’s Luke Pearce and compatriot Wayne Barnes will referee the other Champions Cup quarter-finals between Scarlets and La Rochelle and Clermont and Racing 92 respectively. Ireland’s John Lacey will take charge of the Challenge Cup quarter-final between the Newcastle Falcons and Brive, while Dublin-born JP Doyle gets the game between Pau and Stade Francais.