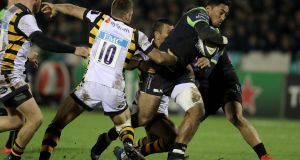 Bundee Aki is out of action until February. Photograph: Morgan Treacy/Inpho

As 2016 grinds to a halt I’m full of the warmth of so many rugby experiences but that there is at last a unified ‘ruthless pursuit of excellence’ across all five professional teams is most significant. In essence, if you are a rugby player in 2017, work extremely hard and the system in place will help you be successful. Look at Connacht.

That Connacht defensive scrum at 71:50 against Wasps five out from home tells of the quality that lies therein. The turnovers were killing Connacht but they weren’t playing badly. A very impressive aspect of their performance was how they changed tactics ever so slightly for the second half. As the forwards spread across the pitch, secondrow Quinn Roux was a crucial pivot when in possession. He looked like he was everywhere but was simply in his preordained slot as the ball flowed his way.

1 Who are Ireland’s 17 billionaires?
2 Election 2020: FF edges ahead of FG as SF surges in new Ipsos MRBI poll
3 Fianna Fáil will be happy, Sinn Féin thrilled but keep an eye on the Greens
4 Schoolboy gets four-year suspended sentence for attack on delivery man
5 NI Assembly votes to reject Brexit withdrawal deal
6 Gardaí suspect botched murder attempt was bid to avenge Mulready-Woods death
7 M50 tolls payment case against Keane Mulready-Woods withdrawn
8 War of Independence discovery reveals IRA spy network
9 Maureen Dowd: Trump is making things easier for women candidates
10 More than 23,000 people apply to be Great Blasket caretakers
11 Dublin gangland figures involved in Drogheda feud that killed 17-year-old
12 Dr Eva’s Great Escape is everything Dermot Bannon’s recent show was not
13 Man jailed for welfare fraud admits to further €18,000 false claim in benefit
14 Gardaí investigating Keane Mulready-Woods murder arrest man
15 Ruth Negga: Playing Hamlet nearly killed me
16 Fine Gael shows its detachment from voters
17 Gardaí making ‘good progress’ on Cork attack where man was set on fire
18 End of the real Jack Reacher? Lee Child passes pen to his brother
19 Ireland has fifth-largest number of billionaires per capita in the world, says Oxfam
20 Netflix: The best 101 films to watch right now
21 The Irishwoman looking after refugees' wellbeing in Berlin
22 Government ignored warnings on increasing pension age – Ictu
23 Micheál Martin rules out future coalition with Sinn Féin
24 Chris Hadfield on the climate crisis: ‘The world has seen much, much worse’
25 What sold for €310k and less in Blackrock, Clonsilla, Bray and Co Meath
26 Ken Early: Solskjaer’s short-term gambles proving very costly for United
27 Gap between retirement and getting State pension set to widen
28 Clontarf tenant says her garden was ‘destroyed’ without warning by Irish Rail
29 How the Aran sweater is taking the world by storm (again)
30 Irish in Argentina: Not always a successful diaspora story
31 RTÉ receives complaint from union after ‘issue’ with spokeswoman’s accent
32 ‘Good riddance’: British papers react to Prince Harry and Meghan Markle announcement
33 ‘I’m going to try my best to squeeze the most out of life”
34 Oscars 2020: Suddenly, it looks like 1917 will win Best Picture
35 ‘Pilates made me more aware of how my body works’
36 FF spoke to Waterford candidate over issues around liquidated company
37 Election 2020: All you need to know about the upcoming general election
38 Meet the Iraqi-American behind Conor McGregor’s success
39 The Irish Times view on the Ipsos MRBI poll: on course for a cliffhanger
40 Johnson suffers parliament defeat as Coveney outlines trade priorities
Real news has value SUBSCRIBE