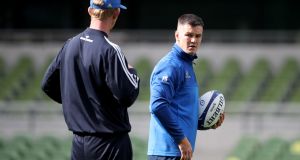 This is it then, the big one. The one we’ve all been anticipating since the draw was confirmed way back on January 19th, the one game that had any tangible relevance for Saracens since their relegation for repeated salary cap breaches was confirmed that same weekend.

The pariahs of the Premiership arrive diluted by the departure or retirement of 11 of the 23-man squad which beat Leinster in last season’s final as well as the suspension of their talisman Owen Farrell. But, in last dance territory, they’ll also be as belligerent as they’ve ever been given this one opportunity to stick a proverbial two fingers at their many critics.

By rights, this would have been a pairing fit for the final again. Saracens are seeking to equal Leinster’s haul with a fourth title (in just five years) while Leinster are three games away from a record fifth title as well as an unbeaten season.

Aside from being the two dominant forces in this competition over the last four years, Saracens are the reigning European champions and outgoing Premiership champions while Leinster have just completed a third Pro14 title in a row.

The prize is huge. If Leinster win, they will host the winners of the Clermont-Racing quarter-final at the Aviva Stadium at 1pm next Saturday in a semi-final which will also be on terrestrial television. For the loser, the 2019-20 season is over.

Mark McCall has unveiled a starting XV all of whom were rested for last week’s win over Exeter. As expected the experienced Alex Goode has been moved to outhalf in the absence of the suspended Owen Farrell, with Elliot Daly reverting to fullback and Duncan Taylor restored to the midfield.

The fitness and selection of Mako Vunipola for his first game since the lockdown is a significant boost and, while Nick Skelton was a major factor in Newcastle, the core of their side still has a familiar look to it, and features eight of the starting XV from the final in Newcastle.

Besides, one of Saracens’ unwavering characteristics is that players fit seamlessly into their well-drilled systems, and with captain Brad Barritt and recalled scrumhalf Richard Wigglesworth also ending their time at the club at the end of ‘this’ season, no visiting team to the Aviva will ever be more motivated.

They’ll seek to dominate the collisions and gainline again, will increase the noise levels in the echo chamber and will die with their boots on. In what could be a fractious affair, the selection of Wigglesworth reinforces the feeling that Saracens will test Leinster in the air, as well as seeking to smother Leinster’s running game with their famed Wolf Pack defence.

Farrell will be in attendance, and will probably be a vocal water boy, yet although the classy Goode has ably filled in at ‘10’ for Farrell before, the latter’s loss has to diminish Saracens.

According to McCall, Farrell has been imitating Johnny Sexton in training, and he’s certainly qualified to do so. It’s not like the normally reticent McCall to give away training ground ploys. Maybe he was trying to spook Sexton. Best of luck with that then.

For all that Saracens have been targeting this game, even as they set about winning their four provincial derbies since the resumption we can be sure Leinster will have done so too. That is reflected in the return of Sexton, Luke McGrath, Will Connors and Seán Cronin to the starting line-up, and perhaps too the selection of Ryan Baird on the bench ahead of Scott Fardy.

While Cronin’s reinstatement is in part caused by Leinster’s lineout woes against Ulster last week, the way Connors helped to negate CJ Stander’s carrying a fortnight ago with his line speed and chop-tackling pointed to him Jack Conan and Caelan Doris being tasked with reducing the impact of Billy Vunipola, tormentor in chief at St James’ Park in last year’s decider.

Line speed and chop-tackling look like the key, for Saracens are an almost unstoppable beast when bashing their way over the gainline. They’re altogether less effective when stopped behind it.

Leinster’s defence was also afforded a good work-out last week. It’s liable to be a taut, tight affair and if one side does push two scores clear it will be very difficult for the other to play catch up given both of them are such good front-runners.

Home advantage is greatly reduced by the absence of fans. Even so, Leinster don’t have to travel, are familiar with the Aviva’s surrounds and new matchday abnormality, are in a good place and have revenge in their nostrils from that last defeat 25 wins ago.

The suspicion also lurks that Leinster have been keeping their powder dry, and that they have more strike plays and multi-phase attacking patterns to unveil.

Form lines are difficult to gauge. However, watching Saracens’ games particularly and the Premiership in general since its resumption, by comparison the Irish derbies have seemed to have been played at a quicker pace.

Leinster weren’t able to get to the edges as they intended in Newcastle but they’re liable to be more successful this time. If so, Saracens may struggle to live with Leinster’s fitness levels and the tempo of this tie.