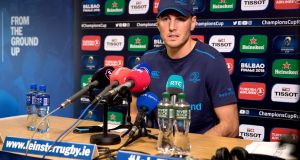 Girvan Dempsey: “What was massive for us is how the guys stepped up, particularly the young guys coming in.” Photograph: Bryan Keane/Inpho

For an hour or so on Monday afternoon Leinster had defiant notions of training outdoors in the hurricane.

Upbeat after a side denuded of celebrity just beat Montpellier on Saturday in their first European match of the pool, they were game for even the challenge of Ophelia.

Common sense prevailed and they moved what they could indoors for a walk through and talk in the hope that outhalf Johnny Sexton and flanker Sean O’Brien could add their names to the squad for Glasgow in Scotstoun at the weekend.

Leinster coach Girvan Dempsey sees the glass half-full. All of the players struggling, Sexton, O’Brien, Isa Nacewa, Rory O’Loughlin, Richardt Strauss, Dan Leavy, James Ryan and Cathal Marsh will be assessed but for Sexton, who suffered a dead leg against Munster and O’Brien, who was stamped playing Edinburgh, Dempsey is encouraged.

“Isa, I don’t know if you saw at the weekend in a tackle, he just rolled his ankle. Thankfully the scan came back and he was fine, a little fluid. Fine. I don’t think he’ll be training today but he’ll be fine,” said Dempsey.

“Sean O’Brien, yeah it’s good. He got that stamp on that calf and that was the thing that held him back. We’ll see how he goes through the week but we hope that he will be available for selection and the two dead legs, Rory [O’Loughlin] and Johnny [Sexton]...Johnny has progressed a lot quicker than Rory has...just a bit slower so Johnny will be training with us.

“There are a good few bodies that aren’t training but everyone is back on the field tomorrow [Tuesday]. He [Johnny] will be training tomorrow.”

But playing at the weekend in Glasgow?

The former Irish fullback has seen Glasgow coach Dave Rennie work close up. The New Zealander took over at Scotstoun when the regarded Gregor Townsend moved upwards to address Scotland and their woes.

A former New Zealand Under-20 coach, Rennie was also with the Chiefs for five years in Super 14, where Dempsey spent some time and was impressed.

Far from Glasgow going into a slump after Townsend’s departure, Dempsey believes Rennie has followed a similar path. Although the Scots ended sixth in last year’s league standings, they are being groomed for better things.

“Yeah I was down at Chiefs a couple of summers ago. I managed to get in and see him at work,” said Dempsey.

“Dave Rennie has evolved what Gregor [Townsend] was doing with them and brought some of the Chiefs’ stuff. It is very evident in terms of the tempo, in terms of the how they are trying to play. Having come across him before, he’s big in breakdowns. They have huge emphasis on breakdowns. [Callum] Gibbons, number seven, has been a big asset to them this year.

“He was clear in terms of how he wanted the game played and wanted the players to play and express themselves and play with tempo and play with width and keep the ball alive...you’ll see the offloads and stuff.

“That’s why the (4G) pitch suits them. Jamie Lowe [former Chiefs] when he arrives [in Leinster], he’ll give you the same. He was given a free licence to do those things. You’ll see that’s what they want to do. They were confident their break was good and they wanted quick ball to allow them to play with tempo.”

But Leinster allow themselves a small helping of pride in how they got the job done against “a near international side” like Montpellier without the heft of Lions and internationals.

The French team might have been forced by Leinster to work harder for their scores but the end result propels Dempsey and his players forward. They will need the momentum as Scotstoun has become a fortress and playing on the synthetic pitch places different demands on players, maybe more than they sometimes realise.

Glasgow too have used the surface to build on their traditional offloading game. They have scored an average of 30 points at home and conceded little. Their first loss was last weekend against Exeter.

“Confidence is the big thing. Confidence and momentum,” says Dempsey. “You look at that Montpellier side and that is a near international side in terms of experience, physique and size across the board and skill set, everything. What was massive for us is how the guys stepped up, particularly the young guys coming in.”

They may be asked to again. So now, what’s the worry.