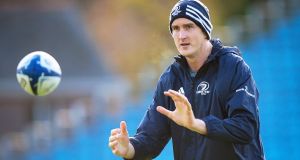 The mystery surrounding Devin Toner’s exclusion from Ireland’s World Cup squad continues to deepen, but the most interesting nugget of information to come from Johnny Sexton’s media conference, on the eve of his and Leinster’s rapid return to Heineken Champions Cup duty, was about Seán O’Brien.

“We had a pretty special meeting on Tuesday,” Sexton revealed. “Leo, Stu and a couple of former players. It set the tone for the week. It just gets you into that mindframe but I don’t think you need it; when you walk in the door in Leinster on European week it just feels different.

“But the meeting on Tuesday was brilliant.”

The Leinster captain laughed and exchanged glances with Leo Cullen before uttering one word.

O’Brien officially joined London Irish this month after 11 years playing for his home province, but it remains unclear if the 32-year-old will sufficiently recover from hip surgery to ever feature in the Premiership.

“There’s a lot of young guys,” Sexton explained. “There is also a lot of experience in the team but we need to focus on ourselves and get things right, our own personal performances, so we don’t have time in a week like this to get around to those young lads.

“[O’Brien’s appearance] was just for them to realise what it is like to play for Leinster in Europe. What it means to the guys that play but what those big days out mean to your family and all those close to you. They are days they will never forget.”

“It is important the young guys realise that. I think they know it anyway, they are born and bred in Leinster, and they know what is expected.”

“I think [Toner] took the disappointment pretty hard, as you would,” said Sexton. “Look, there are lots of different reasons why he didn’t get picked. It is up to him to go into it, I am not going to go into that, but he is a guy that is well liked in Ireland and Leinster. And he is a guy who has performed at the top level for a long time.

“Dev is so calm when it comes to the set piece. When I am dealing with him in terms of lineout calling, he is brilliant to deal with, no matter what time of the game he will make good calls. It is good to get back with him. It was a big disappointment in his career but I am sure he will bounce back.”

Cullen also makes a telling call at fullback, with Jordan Larmour picked ahead of Rob Kearney in what many would see as a changing of the guard. Rory O’Loughlin is even named ahead of Kearney on the bench. The 33-year-old remains on a national contract until next summer.

The backrow pecking order is revealed by Cullen going with Josh van der Flier over Scott Penny at openside and Doris keeping Max Deegan in reserve.

The decision on how to accommodate Joe Tomane and Robbie Henshaw, alongside Garry Ringrose, has been postponed until the trip to Lyon next week, so Henshaw can fully recover from illness.

Unlike Champions Cup holders Saracens, who have not recalled their English internationals, Benetton are close to full strength, with Ian Keatley returning to his home city as the Italian side’s outhalf, but anything short of a comprehensive defeat would be a surprise.

Sometimes setbacks come around when you least expect them. This is just another chance to bounce back

“[Saracens] have got such an incredible team that I actually still fancy them to go and win in Paris,” said Sexton of the English champions’ visit to Racing 92.

Cullen added: “We didn’t have any of our World Cup players playing two weeks ago and that’s probably where they’re at, but we’ve enough to bloody worry about ourselves.”

That’s perhaps why Leinster sought some inspirational words from O’Brien a few days before he emigrates. Just to dot every i and cross every t.

“Sometimes setbacks come around when you least expect them,” added an understandably melancholy Sexton. “This is just another chance to bounce back. I have so many over a long career that I am used to them.”