Gerry Thornley: Seán Cronin out to prove himself again 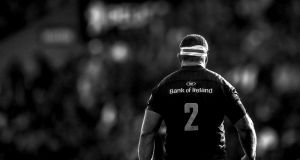 Few in the Ireland camp would have felt lower than Seán Cronin after the Six Nations. Photograph: James Crombie/Inpho

As befits a decidedly mixed bag of a Six Nations, so it was that many of the Irish players came off that tournament in highly contrasting states. Some, such as the Connacht halves Caolin Blade and Jack Carty, are still on a high, but few who could have felt lower than Seán Cronin.

After being given the most overdue first start in Six Nations history against Italy in Rome, following 32 appearances in the tournament off the bench, the 31-year-old Leinster hooker was then omitted for the final two games after three costly lost throws in the Stadio Olimpico.

“Yeah, it was a bit of a disappointment,” he admits before swiftly looking to brush it aside by maintaining he was a resilient type. “I think that’s the big part of it. I think I’ve said before that you’ve got to take the highs with the lows and just try and get better, don’t sulk, don’t get too down on yourself but just look at the next time that you get out there as an opportunity to go and prove yourself and that’s what I’m trying to do here, is just keep proving myself and keep trying to play well.”

Cronin wasn’t the only one who appeared to be nursing a few scars from the Six Nations when playing the first half of the Pro14 loss away to Edinburgh, but got back on the horse in Leinster’s quarter-final win over Ulster. His only outing since was the second half of last Saturday’s defeat at home by Glasgow last Saturday.

“To be honest since I’ve come back from the Six Nations, I wouldn’t be singing or dancing, going around the place. My form has been okay. I’d like to be playing a bit better. But like I said, it’s the character of the person that if you can deal with those lows as best you can and apply yourself and just back yourself, that’s all you’ve got to do.”

I was disappointed, obviously, but no, not scapegoated. I think you’ve just gotta deal with it

Cronin is the not only hooker whose darts are often significantly better with Devin Toner as a target. It was his misfortune that Toner (along with the rested James Ryan and Iain Henderson) had been sidelined since the England game due to ankle surgery.

“I’ve played with Dev since we were Irish Schools so me and him go back a bit so if I don’t like certain calls, I can obviously talk to Dev. But no, we had a good plan going into the weekend in Rome. I just think that some days things don’t fall the right way for you and that’s just part of life and part of sport.”

Did he feel “scapegoated”?

In any event, Toner is back in the mix after his return against Glasgow.

“Dev has, whatever, 200-plus caps for Leinster and I don’t know how many for Ireland. A lot,” says Cronin of the 64-times capped lock. “He has huge experience there and to have him back is a huge plus. Calm guy on and off the pitch and he brings that into the way he operates the lineout, just with the clarification and stuff that he brings early on in the week with his prep.

“It is key for us to have a successful set-piece every weekend we go out so, yeah, he is a huge cog for us and he is back fit. He is ready to go and a big guy for us to have back.

“The fact that he is 6ft 10in is a big help as well, although they’ve got pretty big guys in the row as well this weekend, in [Richie] Arnold and Richie Gray’s back as well, Joe Tekori is no slouch either so it will be a big test for us in the set piece this weekend.”

Cronin has been an ever present this season, and is the tournament’s joint leading tryscorer with six, including tries in both games against Toulouse.

“They were both very different tries. One of them was from I’d say three centimetres out and the other one was a nice line off Johnny [Sexton] over there. They are good games, the one here and over there, fantastic games to play in.

“You could see by the way they reacted over there that it meant a lot for them to beat us. They have huge pedigree in Europe and you can see the way their club buys into it still. So, I’d say it will be another great occasion at the weekend.”