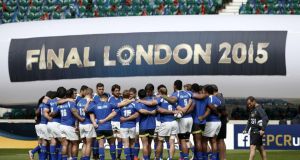 Clermont Auvergne training at Twickenham ahead of their European Champions Cup final against Toulon. They are hoping for their first European Cup victory. Photograph: Adrian Dennis/AFP/Getty Images

Ultimately, the rugby won out, or at any rate the occasions did. The semi-finals may have been taut arm wrestles, but the sight of the Clermont players conducting their lap of honour in front of a capacity 41,500 at the Stade Geoffroy-Guichard in St Etienne after beating Saracens 13-9 left no one in any doubt as to the standing of the European Cup in the emotions and minds of players and supporters alike.

Despite the bully-boy tactics of the Anglo-French club axis, in the guise of Premiership Rugby (PRL) and Ligue Nationale de Rugby (LNR), to scupper the best club tournament in the world, semi-final weekend was vintage Heineken Cup.

Afterwards, the Saracens centre Brad Barritt said: “As far as a club rugby goes, I haven’t experienced anything like that, and I think it raised us and gave us an extra boost. To play in games like these, it brings out the best in competitors.”

It was a similar story, the next day in Marseilles at the Stade Vélodrome when 35,116 saw Toulon come through in extra-time against Leinster. Afterwards, Toulon’s former All Blacks’ lock Ali Williams said: “They bashed us and we bashed them. It was sort of tit for tat really and I think it just shows what a great competition and what great sides there are in Europe. I personally think it’s a fantastic competition.”

For sure, lots of cash is the primary reason clubs such as Toulon and Racing Métro can almost cherry pick their favoured targets, but the primary rugby selling point for players from outside Europe is the European Cup.

And yet the newly-revamped competition, under a new organising body European Professional Club Rugby (EPCR) and largely driven by that Anglo-French club axis, has failed on many levels. That there will be fewer than 50,000 at the final today is a fitting postscript to the hastily-convened decider to what was, after all the brinkmanship, a hastily-convened tournament.

Twickenham was an unimaginative choice for a final given the rugby world will have had more than it’s fill of the place by the end of the year, all the more so as the organisers only had a 13-day window after the semi-finals.

When Twickenham was confirmed as the choice of venue for the final last August, Craig vowed it would be an “unforgettable experience”. The outgoing organisers, ERC, had chosen Milan’s San Siro stadium, but with the change in venue came a change in date, with the final brought forward by three weeks from the penultimate week of the season near the end of May.

That was induced purely by a typically parochial desire by the French clubs for their championship to have an unfettered four-week run-in, which the English clubs supported and which was conceded by the browbeaten unions and federations.

In all of the politicking and revamped structures, Craig and co had sought to emulate Uefa’s European Champions League, yet as befits the latter’s status as the blue riband of European football, it is the climax to the season. This year’s final will be in the Olympiastadion in Berlin, on June 6th, in contrast to today’s May 2nd decider. Perception is everything and the competition and the final was devalued at a stroke. You reap what you sow.

At least the EPCR appear to have seen the error of their ways to some extent. Paul McNaughton, the interim chairman of the tournament’s governing body, has indicated as much.

“I am not sure that in this case playing in the middle of the month would have made a huge difference. That said, there is a feeling that the two finals [the European Champions Cup and Challenge Cup finals] should be played in the middle of May rather than the beginning and more are coming round to that.”

In a similar desire to give primacy to the Top 14 and Aviva Premiership, the European Challenge Cup was devalued by the decision to deny the winners automatic qualification for the ensuing season’s Champions Cup. The French clubs in particular fielded a mixture of their seconds and espoirs, and not one of them reached the last eight of the Challenge Cup.

Commercially too, the new tournaments have not delivered as promised. The loud criticism of ERC, the Heineken Cup organisers, from English and French clubs and media, was that they had failed to maximise the commercial potential of the competition.

But not even the projected “two or three” sponsorship partners, much less the targeted five akin to Uefa’s Champions League, were delivered. Instead, Heineken again came on board, but not as title sponsors and so at a much reduced price.

The TV revenue has increased, with a joint Sky-BT Sport deal enabling the tournament to remain in existence and the French and English clubs increasing their share of the pie from about 24 per cent each to 33 per cent each, but at a cost in every sense to viewers, especially in Ireland.

These were perhaps inevitable consequences of the long-running dispute, which effectively dragged on from the end of the 2011-12 season until April 2014. Another consequence was that EPCR were compelled to hire ERC staff to run the tournaments.

Only in the past week has the former England centre Simon Halliday been confirmed as the first independent chairman of EPCR. Halliday will start the part-time position, which carries a salary of almost €60,000 a year, next week.

Vincent Gaillard, a former Coca-Cola executive, will start as the EPCR director general in July. He joins from SportAccord, which like EPCR, is based in Switzerland, where he is chief executive.

However, that the EPCR will base themselves in Neuchâtel, Switzerland from next season, appears to be borne largely out of a French desire to move the organisations’ headquarters out of Dublin, where the ERC have traditionally been located. This also looks ill-advised. It also makes any individual moves from the ERC into the EPRC extremely complicated.

“I’m very conscious of that scenario,” said McNaughton, who didn’t exactly give the organisers a ringing endorsement for their choice of office space.

Indeed, it has probably only dawned on Leinster players and supporters in the last week that they need to win one or possibly even both of their final two games to ensure automatic qualification for next season’s Champions Cup.

Reducing the competition from 24 to 20 teams did not have the discernible impact on standards that many forecast or maintain. Granted, there was something tangible to play for in all five pools, but the old imbalance remained with Racing and Northampton getting nine and 10-point leg-ups against Treviso. The seeding system is also too loaded toward the leagues, to the exclusion of achievements in Europe.

But the rugby and European club rugby’s unique sense of occasion has shone through, even if the finale is not quite lived up to what Craig promised, while it remains to be seen what kind of final Clermont and Toulon throw up. If Clermont’s brand of rugby holds sway, all the better.

The shift in the balance of European power toward the French big two has been confirmed, and so it is that the serial winners come up against the serial nearly men, for the second time in three years.

Two years ago Clermont played most of the rugby but contrived to lose, adding to the nine lost French Championship finals before they broke their duck in their 99th year at the 10th time of asking. Meantime, Toulon are aiming for a record, third successive European Cup, following last season’s Euro-domestic double.

Toulon’s proven mental strength against Clermont’s proven mental frailties makes them favourites. Yet Clermont would be the more popular winners, not least with the Leinster, Munster and Ulster fans who have built rapports with the Yellow Army.

The appointment of Nigel Owens is good for Clermont, and so too, perhaps, the forecast, of a mostly dry day, albeit with a risk of showers, especially in the second half.

And then there’s Jono Gibbes. The Kiwi was forwards’ coach for three of Leinster’s wins, and has already improved Clermont’s set-piece game – previously a potential weakness in knock-out ties. That was underlined in their taut semi-final win over Saracens.

Toulon’s Maxime Mermoz has been ruled out, so Juan Martin Hernandez starts at inside centre with Matt Giteau at outhalf, while Steffon Armitage – a potential match-winner – is recalled to start. Drew Mitchell replaces Delon Armitage. Clermont have recalled Morgan Parra at scrumhalf with Brock James again preferred to Camille Lopez, while Fritz Lee returns at number eight.