New venue yet to be decided for 2020 final, Tottenham to now host showpiece in 2022 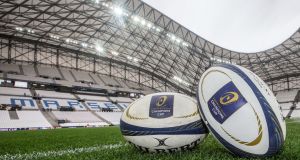 The 2020-21 Champions Cup final has been moved away from Marseille’s Stade Velodrome. Photograph: James Crombie/Inpho

The 2019-20 Heineken Champions Cup final is to be moved away from Marseille’s Stade Vélodrome, European Rugby have announced.

This is due to “uncertainties created by the Covid-19 pandemic,” with a new venue for this year’s postponed final still to be decided.

An EPCR statement read: “Due to the many uncertainties created by the Covid-19 pandemic, it has been decided that the 2020 Heineken Champions Cup and Challenge Cup finals will not now be held in Marseille as planned and the matches will be played at a new venue or venues.

“With tens of thousands of fans scheduled to travel to the south of France, the Board of EPCR and the local organising committee have agreed that insufficient safeguards are currently in place during the public health crisis to stage two high-profile matches at the 67,000-capacity Stade Vélodrome.

“As a consequence, EPCR is currently working with its shareholder leagues and unions to secure an alternative venue or venues for the two finals which will be played on the weekend of 16/17/18 October, and details will be announced as soon as practicable.”

EPCR also confirmed any tickets held for this year’s final will automatically roll over to 2021.

The Champions Cup is set to resume on the weekend of September 18th, with Leinster taking on Saracens and Ulster facing Toulouse in the quarter-finals.