ERC-run Heineken Cup to go ahead next season 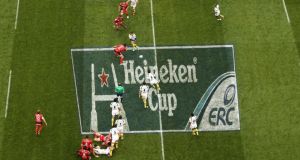 The Heineken Cup has, to all intents and purposes, apparently been saved for next season at any rate following yesterday’s unanimous decision by all 30 clubs in the Ligue Nationale de Rugby that they will take part in the ERC-run competition next season. In disengaging themselves from their alliance with the English clubs’ umbrella organisation, Premiership Rugby (PRL), this effectively sounds the deathknell to the latter’s proposed breakaway competition, the Rugby Champions Cup.

A fornight ago, at a meeting in Marcoussis, the French Federation’s rugby centre, the FFR President Pierre Camou made it clear to the LNR representatives present, including its president Paul Goze, that there would be no new agreement (la convention) between those two organisations regarding TV deals, player release and so forth until such time as the French clubs withdrew its support of the Champions Cup.

What’s more, he made it clear that they had until December 7th to recommit to the ERC-run pan-European competition, for which he had also offered them €2 million apiece.

At another meeting between the FFR and LNR last Friday in Marcoussis, Camou – a stubborn but clever man whose commitment to the Heineken Cup and ERC was due to a passionately held belief that this was for the overall good of the European game – re-iterated his stance that he was not for budging.

The LNR, including representatives from the Top 14 and the 16-club ProD2, convened in the Hilton Hotel at Orly airport yesterday – Montpellier and Castres along with nine of the ProD2 clubs did not attend – where there was a realisation that they could not take part in the Champions Cup without the approval of the FFR and, by extension, the French Minister for Sport, Valerie Fourneyron.

Significant jeopardy
They also accepted that to not re-commit to the ERC-run competition would place the immediate future of French rugby in significant jeopardy, as well as a recognition that the Champions Cup had no other foundation aside from PRL’s deal with British Telecom.

That said, Rene Bouscatel of Toulouse, Thomas Savare of Stade Francais and the Racing Metro owner, Jacky Lorenzetti, remained opposed to rejoining an ERC-run competition, with the latter reportedly storming out of the meeting, but the ensuing statement was agreed unanimously. The French clubs could also console themselves that the European Cup’s six founding unions and federations had acceded to their demands on a 20-club format, meritocratic qualification and financial share-out.

That said, the LNR’s complicatedly worded statement (even to French journalists) contained a couple of face-saving caveats, namely the participation of the English clubs and overhaul of the competition’s governance from 2015-16 onwards after a “transitional” season next year. The former is not seen as a fait accompli next season, and the desire for a new, Uefa-type governance is something which the French, Irish, Welsh, Scottish and Italian unions stated after their meeting in Dublin last week.

It remains to be seen whether the English clubs come back into the fold. Mark McCafferty, the CEO of PRL, has isolated the English clubs from the rest of Europe based on a much trumpeted deal with BT – the details of which have never even been shown to the RFU – and little else other than threats and bravura promises.

Not partaking in next season’s Heineken Cup would actually be in breach of the final year of their long-term agreement with the RFU, according to its former chairman Martyn Thomas. “There’s a contractual obligation there that the RFU can enforce,” he has claimed. “It not only provides that they will play in Europe to the end of the season 2014-2015, it also provides that they will play in no other professional competitions.”

Long-form agreement
The current RFU chairman, Bill Beaumont, and its CEO, Ian Ritchie, have been negotiating a new long-form agreement with their clubs and want to keep them on board less than two years out from hosting the 2015 World Cup. In any event, as one insider put it, “the Celtic Unions got fed up of Ian Ritchie playing Neville Chamberlain, ie waving bits of paper and delivering nothing”. Hence they and the French and Italian federations went ahead with last week’s meeting in Dublin which committed to a pan-European tournament next season with or without the English clubs.

Ironically, the possibility of the English clubs boycotting the competition, a la the 1998/1999 season when Bath were prevented from defending their European title, remains a distinct possibility in the season before England host the World Cup given how far they have gone and the pride of some of the individuals involved.

The Welsh regions, autonomous and at loggerheads with the WRU, face the stark choice of reluctantly returning to the Heineken Cup fold or taking a risky rebel route which would hinge upon the PRL offering them places in the Aviva Premiership. There has been no indication of this being offered, nor that it is what the PRL wanted.

In any event, well-placed sources confidently expect next season’s Heineken Cup to retain its title sponsor, and to be televised by Sky Sports, with whom ERC have agreed a new two-year deal.

Entreaties will assuredly be made to the English clubs and Welsh regions, and it may be time for the IRB to bring the six unions and federations together for further talks.