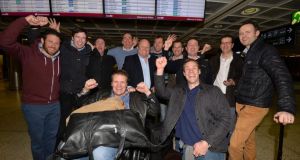 Ben Goss (centre) with Andy Beattie (right), former England International and Bath Rugby player, with colleagues and friends from London, The Midlands and Gloucestershire, after arrivng at Dublin Airport for the Six Nations clash with Ireland on Sunday. Photograph: Alan Betson

The latest English plantation of Ireland was steadily under way on Friday night, although you had to look hard to see it on the streets of Dublin. By Sunday afternoon, if intelligence reports are true, as many as 15,000 visitors will be planting their backsides in the Aviva Stadium, two-thirds of them on seats originally allocated to Irish supporters.

The difference this time will be that the dispossessed — fundraising Irish rugby clubs and profiteering individuals — will be willing collaborators in the settlement, taking advantage of England’s desperate need for tickets and laughing all the way to the banks.

In the meantime, however, the other costs of a rugby weekend, combined with a Sunday kick-off, made for a subdued start to events on the city’s streets.

Add the fact that the English jersey is the least stain-friendly in the Six Nations and you can understand why so few supporters risked wearing it too early. If you have to buy your ticket at a mark-up, being taken to the cleaners once here is enough.

But plain clothes and all, a group of six supporters enjoying pints and oysters in the Temple Bar pub still stood out. The three males among them were all wearing flat caps, which at first looked like an under-researched attempt to mingle with the locals.

On closer inspection, they proved to be from the cap-happy English north: Liverpool and St Helen’s, neither a rugby union stronghold. In another surprise, they couldn’t get over what good value Dublin was.

Mind you, the canny sextet had booked a three-bedroom apartment in Smithfield, at €660 all in. “In a hotel, we’d be paying €200 a night each, but we’ve covered it at one go,” said Stu Worrall, here with his wife Louise.

“And we have three bathrooms too,” chimed in Nicky Huntingdon, who was impressed with everything from the “lovely area” (yes, Smithfield) to the excellent breakfast they had locally for only €7.50 each.

The current might of sterling helped, they admitted. And there remained a big threat to their budgets in that, so far, they had only two match tickets.

Even so, Nicky’s husband Carl spoke for everyone when he said that they’d been “all over the Six Nations venues” and that, everything considered, “Dublin is by far the best”.

He then spoiled the friendly mood by predicting that England will win, and comfortably. “All the pressure’s on Ireland,” agreed Stu. “And you don’t have O’Driscoll any more. You’re still looking at the past. We’re looking at the future.”

Stu was also looking at the odds on England winning by between 11 and 15 points. “Nine to one with Paddy Power,” he said, with the confidence of a man who thought it was a free money scheme.

Nearby, meanwhile, the accents of another group — from the rugby bastion of Northampton — betrayed them as obvious supporters, even though they too were undercover.

Sure enough, they confirmed they were here to witness what they hope will be a winning performance by one of the most exciting ensembles (in their opinion) England has ever produced.

But they didn’t mean the rugby team, it turned out. The group was here for a kick-off of a different kind: involving 1980s pop veterans Spandau Ballet, who start a world tour in Dublin on Tuesday.