Connacht winger Cian Kelleher will return to Leinster next season 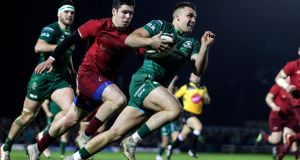 Connacht winger Cian Kelleher runs in a try during the Guinness Pro 14 game against Munster at the Sportsground. Photograph: Laszlo Geczo/Inpho

Connacht wing Cian Kelleher will return to Leinster next season. The 24-year-old left Dublin for Galway in 2016 after turning down a promotion from the Academy into the senior squad.

Leo Cullen did not want to lose the excellent attacker, especially with Luke Fitzgerald forced into early retirement, but Kelleher went west in search of game time.

Despite an injury-disrupted first season, he has proved a crowd favourite at The Sportsground with 14 tries in 44 appearances – the most recent against Munster last Saturday – but the opportunity to return home and seek international honours proved too strong.

It’s a blow for Andy Friend’s improving squad, with Connacht presumably attempting to turn the loan move of Leinster centre and Ireland Sevens captain Tom Daly into a permanent deal.

Jordan Larmour and the currently suspended James Lowe have been the starting wingers in Europe this season with Adam Byrne, Barry Daly, Dave Kearney, Rory O’Loughlin and injured pair Joe Tomane and Fergus McFadden the other options.

Kelleher may even join younger brother Ronan on next season’s senior roster. The 20-year-old Lansdowne hooker is believed to be putting pressure on the current Leinster pecking order of Seán Cronin, James Tracey and Bryan Byrne.

Both Kellehers were educated at St Michael’s College where their father, Tim, is principal.