Connacht to reap benefits of break as injury crisis eases 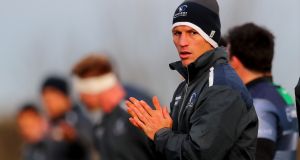 Pat Lam’s defending Guinness Pro 12 champions should have a pep in their step this evening as the injury crisis that undermined their start to the season is largely behind them.

Prop Denis Buckley, hooker Tom McCartney and scrumhalf John Cooney, the latter for the first time this season, have been named in the starting team following injury; ditto Nepia Fox-Matamua, albeit he is named among the replacements.

Connacht’s South African signing, outhalf Marnitz Boshoff, is also on the bench and set to make his debut. James Cannon has won a starting place alongside Quinn Roux in the secondrow.

Niyi Adeolokun returns to the team a fully-fledged international after his debut against Canada.

Lam admitted: “The break in games has been extremely beneficial as we have been able to get some players back from injury and work on improving our game.

“We really enjoy playing Cardiff as they are always a tough challenge. Our games always go right down to the wire. We will have to be on our game as their away form is very good this season.

“We know we have to improve on our last outing to get the points on offer so being back at the Sportsground after a long break is a major boost. The atmosphere will once again be electric as its all set to be a full house, which is fantastic on an international weekend.”

Cardiff have been able to rest a host of players over a couple of Anglo-Welsh Cup weekends, coach Danny Wilson makes 13 changes from last week. Blaine Scully and Rey Lee-Lo return following their international exploits, with USA and Samoa respectively, while four Welsh internationals have been released by the national squad to play, including scrumhalf Tomos Williams and Alex Cuthbert.

Cardiff have a good record in Galway despite losing the corresponding fixture here last season but the return of several players might just nudge Connacht over the line.

1 Waterford turn Kilkenny upside down and inside out
2 Jim McGuinness: There is a way to save championship and make it competitive
3 Waterford’s frenzied waves of attacks too much for Kilkenny
4 Once in a blue moon: Cavan’s overnight success 15 years in the making
5 Ireland’s work-ons: Four things Andy Farrell needs to address
Real news has value SUBSCRIBE