Blow to Leinster as Robbie Henshaw to miss start of season 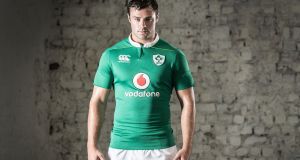 Robbie Henshaw: I was pretty shocked . . . The only thing I can do is do the best I can to recover and get back.” Photograph: Dan Sheridan/Inpho

start of the rugby season. Leinster’s new signing could also miss out on the opening two European Champions Cup matches in October. Leinster have been drawn in a pool with Northampton, Montpellier and Castres.

The Irish centre, who has just returned home from a holiday in Barbados, has his left knee in a brace after tearing knee cartilage in Ireland’s second test against South Africa last month.

Depending on how quickly the cartilage mends, the November international matches – including one in Chicago against the All Blacks – may also be out of reach as doctors have informed him it could take up to four months before he is back playing. It is the most serious lower limb injury of the 23-year-old’s career so far.

“No I don’t think that is going to happen,” said Henshaw about lining out for Leinster’s opening league games. “After I got the scan they told me it would be between three or four months so . . . I will be looking at the end of September, October.

“It’s not an ideal start for me. I was pretty shocked to hear it when it happened. It’s one of my first big enough lower limb injuries so it’s not ideal and starting with a new club you want to make a massive impact from the get-go. The only thing I can do is do the best I can to recover and get back.”

It is a disastrous start for both Henshaw and Leinster coach Leo Cullen, who will have the 2011 World Cup winning New Zealand coach Graham Henry in Dublin next week.

But Henshaw knew it was serious when he went down in the latter stages of the Johannesburg match.

“Yes. I knew straight away there was something wrong,” he said. “I felt something go and I couldn’t straighten it. I tried to get up and kinda walk it off or run it off but it wasn’t allowing me and I knew it wasn’t good.”