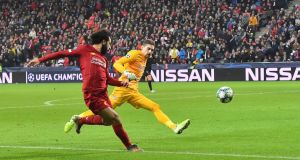 All Blacks assistant coach Ian Foster has been appointed as the new head coach of the national side, succeeding his former boss Steve Hansen. Foster served eight years as Hansen’s assistant and his appointment continues NZR’s ‘continuity planning’ in the national side. In his column this morning (Subscriber Only), Gordon D’Arcy explains why a power struggle between coach and captain is an essential dynamic for a successful team, referring to the Ireland team he writes: “tension between the on field and off field leader should be inevitable. Harnessing such exchanges is how a team ultimately measures its success.” The former Leinster centre is backing James Ryan to be named as the next Irish captain.

Reigning champions Liverpool secured their place as group winners and their passage to the last-16 of this year’s Champions League, with a 2-0 win in Salzburg last night. Naby Keita opened the scoring before Mo Salah’s wonder goal sealed the victory for the Premier League leaders. Chelsea also qualified from their group with a 2-1 win over Lille. Tonight José Mourinho’s Tottenham take on Bayern Munich, with both teams already qualified Ryan Sessegnon is set to make his debut. Manchester City have qualified as group winners and Pep Guardiola will use their match against Dinamo Zagreb as an opportunity to give Phil Foden only his fourth start of the season.

1 Who are Ireland’s 17 billionaires?
2 Election 2020: FF edges ahead of FG as SF surges in new Ipsos MRBI poll
3 Schoolboy gets four-year suspended sentence for attack on delivery man
4 Gardaí suspect botched murder attempt was bid to avenge Mulready-Woods death
5 NI Assembly votes to reject Brexit withdrawal deal
6 War of Independence discovery reveals IRA spy network
7 Fianna Fáil will be happy, Sinn Féin thrilled but keep an eye on the Greens
8 Fintan O'Toole: Safety-first politics has had its day
9 More than 23,000 people apply to be Great Blasket caretakers
10 End of the real Jack Reacher? Lee Child passes pen to his brother
11 Ken Early: Solskjaer’s short-term gambles proving very costly for United
12 Dublin City Council throws out Iveagh Markets application
13 I’ve handed in my notice and I’m leaving Brexit Britain
14 M50 tolls payment case against Keane Mulready-Woods withdrawn
15 Maureen Dowd: Trump is making things easier for women candidates
16 What to say to someone who has cancer
17 Gap between retirement and getting State pension set to widen
18 Nama lends Cosgraves €15m to fund huge apartment development
19 Navigating the health insurance maze and finding the best deal
20 What sold for €310k and less in Blackrock, Clonsilla, Bray and Co Meath
21 The importance of relationships and belonging
22 Gardaí investigating Keane Mulready-Woods murder arrest man
23 Election 2020: Saturday voting not a solution for low voter turnout
24 Ryanair suing Skyscanner for allegedly selling flights through its domain
25 How the Aran sweater is taking the world by storm (again)
26 The Irishwoman looking after refugees' wellbeing in Berlin
27 Government ignored warnings on increasing pension age – Ictu
28 Thousands gather for US gun rights rally in Virginia
29 The Secret Teacher: ‘Social media contact with students is an absolute no-go area’
30 Dublin’s Inchicore at risk of escalation of anti-social behaviour, report warns
31 Gardaí making ‘good progress’ on Cork attack where man was set on fire
32 Life in Brexit Britain: The message is clear – fit in, or get out
33 How to get to the Champions Cup final without breaking the bank
34 Johnson suffers parliament defeat as Coveney outlines trade priorities
35 Chris Hadfield on the climate crisis: ‘The world has seen much, much worse’
36 Netflix has revealed its most-watched content. You might be surprised
37 Dr Eva’s Great Escape is everything Dermot Bannon’s recent show was not
38 The clitoris has 8,000 nerve endings (and nine other things we learned from a new artwork)
39 Shane Lowry agreeing to play in Saudi Arabia is an unfortunate choice
40 Ruth Negga: Playing Hamlet nearly killed me
Real news has value SUBSCRIBE