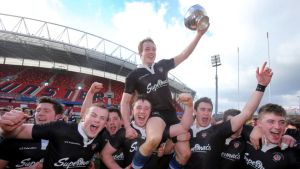 Crescent Comprehensive sprang a big surprise when they became the first team to win the Munster Schools via the back door system since it was introduced a few years ago.

In doing so they bridged a 19-year gap for the school which prompted former Justice Minister Desmond O'Malley - he was hooker on the Crescent team beaten in the 1957 final by Pres-to remark that it is a great time for the Jesuits. “We have the Pope and now the Munster Cup” he said.

Beaten 15-5 by Rockwell in the opening round, not many gave Crescent much chance. But they played superb rugby throughout a final which, in the first half, lived up to all the traditions of the competition.

Bone crunching tackles, solid kicking from the hand and foot, and plenty of running rugby by both sides was the order.

Amazingly Crescent led 16-5 at the interval but the second half became a boring affair once Rockwell's star fullback, Steve McMahon was shown a straight red card for a reckless tackle on William Leonard who had to retire injured.

This had a profound influence on Rockwell who became disorganised and when a plethora of substitutions were made by both sides the jubilant Crescent supporters were already planning their celebrations.

Rockwell, winners for the past two seasons, fell behind as early as the fourth minute when they were penalised for not rolling away from a maul.

The outstanding Crescent captain, Gearoid Lyons, kicked the penalty from 26 metres and he added another after twelve minutes.

From the left side touchline Lyons kicked a fantastic penalty to make it 9-0 but Rockwell steadied themselves and worked a splendid try after 25 minutes when David O'Mahony got in at the corner after a great break by flanker Jimmy Feehan which was carried on by Sean O'Connor who slipped the pass to O'Mahony.

It was game on at 9-5 but crucially Crescent added seven more points on the half hour. Man-of-the-match Lyons created the initial space which culminated with JJ O'Neill racing in at the left hand corner. Again, from the touchline, Lyons added the points.

The sending off of McMahon enabled Lyons to land another penalty and he was on target once again when a Rockwell forward was offside in front of his own posts.

That made it 22-7 and fittingly Crescent finished with a well worked try. Second row Jonathan Keane and the superb Jack Dinneen created the chance for Diarmuid Dee to go over beside the posts and surprisingly Lyons missed the conversion.

By then it did not matter as Crescent had one hand on the trophy. They sat back and allowed Rockwell to stage a series of surges for the line but with their pack on top the Limerick side had few moments of anxiety.

France warm up for Ireland with impressive win over Wales