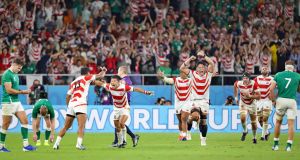 Japan celebrate after their famous win over Ireland in Shizuoka. Photograph: Jiji Press/EPA

Back to earth with a bump. A week after they got their Rugby World Cup campaign off to a flying start against Scotland, Ireland are firmly back in their box.

Joe Schmidt’s side were put to the sword by a thrilling Japan side in Shizuoka on Saturday morning, the hosts running out 19-12 winners as they caused one of the top three upsets in tournament history.

After rolling over the Scots, Ireland’s second assignment seemed like a forgone conclusion.

The Brave Blossoms were scrappy and nervy in their opening win over Russia, their performance the polar opposite of Ireland’s display of ruthless efficiency in Yokohama.

But the tournament hosts flourished on Saturday, grasping their opportunity with both hands as they out-fought and out-thought Ireland – dominating the collisions throughout while also remaining true to their thrilling brand of running rugby.

And it was a showing which has made the world stand up and take notice, as Jamie Joseph’s side evoked memories of their famous win over South Africa in 2015.

Indeed, in the Guardian, Paul Rees writes: “If Japan left it late against South Africa four years ago, here they took a grip on the game from the moment Michael Leitch, their captain who had been surprisingly named on the bench, came on to the field after 30 minutes. The hosts had troubled Ireland with their ability to offload in contact and spread the ball wide, but they were also excitable.

“Japan had been camera-shy on the opening night against Russia but here they revelled in the spotlight. It was Japan at their effervescent, inventive best. Faced with a defence arguably the sharpest off the line, they took it on, creating room by releasing in contact or passing out of the back of the hand.”

If anything was going to light the blue touch paper and bring this Rugby World Cup roaring to life it would be a landmark result for the hosts.

On paper, Japan were the middleweights in a pool which Ireland, and to a lesser extent Scotland, were expected to dominate.

That script was well and truly ripped up on Saturday morning. In the English Independent, Samuel Lovett writes: “They had come in their masses. From Tokyo, Yokohama, Osaka and beyond. Filling the Shinkansen trains, seat after seat, row after row, Japan’s fans poured into the local area with high hopes of an upset. For the opening 20 minutes of this encounter, such hope seemed fanciful at best.

“As the whistle finally blew and Japan’s exhausted bodies fell to the turf, a sense of what had been achieved washed over the crowd. With this victory, a place in the quarter-finals is now in reach. A fitting reward for a nation that is continuing to thrill and delight at a World Cup that is already shaping up to be one of the most memorable in recent years.”

In Rugby World Cup history, this certainly ranks as an upset to match Western Samoa’s win over Wales in 1991, and Japan’s win over the Springboks in Brighton four years ago.

But while there might have been an element of luck in both of those victories, Saturday’s was far from a fluke. In the Telegraph, Tom Cary writes: “Shizuoka Stadium Ecopa was famously where Ronaldinho lobbed David Seaman back at the 2002 Fifa World Cup. It has now witnessed another world-famous sporting mugging. Although the truth is – while this was a massive upset – this was no mugging. This victory was utterly, utterly deserved.

“Japan were sensational; showing real attacking verve and defensive solidity, taking Ireland’s early tries in their stride and finishing the match by far the stronger team. After their historic win over South Africa four years ago, they have done it again.”

Ireland’s defeat has reverberated around the rugby world, and the magnitude won’t be lost on Japan itself as the nation embraces its home tournament.

In Japan Today, Rich Freeman writes: “Japan coach Jamie Joseph said his team needed “to play the game of their lives” if they were to beat world No. 2 Ireland, and the Brave Blossoms did just that, winning 19-12 on Saturday in the biggest upset of the Rugby World Cup so far.

“In front of 47,813 passionate fans at Shizuoka Stadium Ecopa, four penalties and a conversion from Yu Tamura and a try from Kenki Fukuoka, who was only added to the side hours before the kick-off, saw Japan record their first-ever win over Ireland and go top of Pool A.”

One moment in Shizuoka has come under particular scrutiny – Joey Carbery’s decision to kick the ball into touch at the death, securing Ireland a losing bonus point but denying them the opportunity to run the length of the pitch and earn an improbable draw.

Afterwards, Carbery backed his decision, which while appearing defeatist could end up being prudent in the long run. However, it has left some people scratching their heads – particularly in Carbery’s native New Zealand, who are now looking like like Ireland’s likely quarter-final opponents (providing there are no more slip-ups).

Indeed, in the New Zealand Herald, Stanton Bell asks: “Did he think it was a penalty so the kick didn’t matter and the Irish would have got the ball back?

“Did he think to just bang it down field, hoping that one of his speedsters out wide would win the race to it, scoring a the try that tied the game?

“Or simply had he had enough – did he kick it out so that there was no chance Japan could score again, and deny Ireland a bonus point?”

Back to the drawing board. There’s plenty of work for Ireland to do before they meet the All Blacks. 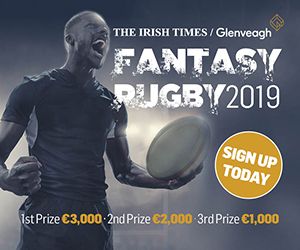