Gordon D’Arcy: Ireland can catch Argentina in a double-bluff

Donnacha Ryan pays tribute to his team mate and long time friend, Paul O'Connell, while thanking fans for creating an electric atmosphere during the French game.

I first played rugby alongside Paulie O’Connell for the Ireland schoolboys in 1998. Even then you could see a born leader. All he had to do was walk into the room and his body language drew people to him.

It was amazing to behold.

He not only embodies every value you want in a rugby player – always first in, last out of training – but there is more to being a great leader than being the best player on the field and the hardest working.

It’s also about being a good team-mate when the rugby part of the day is over. He was always great company to sit around with and have a cup of tea or a pint. He made people feel at home, which is so important when stuck in some hotel in the depths of a New Zealand winter trying to recover from defeat to the All Blacks with a second Test looming.

The real loss though is what he did to opponents. A Sébastien Chabal or Heinrich Brüssow or Victor Matfield or any English jersey made him dig deeper, made him find a new level of performance.

I learned this the hard way. It was at the RDS on September 28th, 2008. Rocky Elsom’s first match against Munster. The word was already out about our brilliant Wallaby flanker. I was injured but with Johnny at outhalf and Felipe Contepomi at 12 we had the strongest possible team on the field.

They nilled us, 18-0 in Dublin, and Paulie was spectacular. He brought that same ferocity to the Ireland jersey every single time I shared the changing room with him. He never dipped, not once.

I know this seems like a disaster. The horrible thing about sport is mourning such influential leaders, like Paulie and Pete O’Mahony, but that must now be put to one side. Their loss from the team room can still be tapped into as a form of motivation. It is Sunday’s team talk.

To lose three such inspirational players in such a short space of time, as happened at the Millennium Stadium last Sunday, would have probably meant defeat four years ago. And ended any hope of progressing in the tournament.

That doesn’t seem to be the case now. Of course they are serious men to take out of the team but this is why Joe has built squad depth for the past two years.

In the face of huge adversity Iain Henderson, Chris Henry and Ian Madigan, in particular, delivered with individual moments of calm excellence.

France were caught by the Schmidt-Sexton/Madigan bluff as we ran at them from deep. Our tactics during the warm-up matches and against Italy promised a kicking game but then we did the complete opposite. They weren’t prepared for that and it showed.

By using Tommy Bowe mostly as a decoy, when the ball had gone to him in recent games, Ireland created several Freddie Michalak-Seán O’Brien collisions.

Then, as France began to adapt, Bowe was set free by the outstanding Robbie Henshaw on 30 minutes.

Ideally they wanted Michalak to be tackling the trailing player, in the inside centre position, so it meant Mathieu Bastareaud had to make a tough decision in midfield. He probably made the right call; forcing Robbie to make a really low-percentage pass but Robbie nailed it and Tommy showed why he is back in the team. The try didn’t happen but it didn’t matter.

Henshaw’s performance, in all aspects, was world class.

Ian, from his first penalty kick, delivered but while the subs were the icing on the cake in this collectively brilliant performance – Dev Toner and O’Mahony having games of their lives – towards the end of the first half I was worried about how loose the game had become. That suited the French.

On 35 minutes we were in real trouble until Rory Best’s turnover in our 22. It was a Thierry Dusautoir carry, Jamie Heaslip made the tackle and Rory got over the ball and could not be shifted by two bigger French forwards. A power play, similar to Bernard Foley’s second try to tear the English defence asunder, seemed to be happening.

At this point the result really could have swung either way. We had just lost Johnny and seemed vulnerable. Off-the-top lineout ball allowed Seánie to find and target Freddie again. It also forced Dusautoir and Louis Picamoles to haul him down. Dave Kearney received possession on the far side of the ruck but switched the play to Mads. What I really liked was the pass from Dave as it meant Ian had time on the ball to make the correct decision.

What Ian did was exactly what Ronan O’Gara or Johnny would have done and he executed to perfection. There was the option to attack but Mads looked up and made the high-percentage decision: a thumping low grubber that bounced away from Scott Spedding and went into touch seven, eight metres from the French line.

It may not seem like much but in the context of the game it was massive. France had just had a really strong attacking period. The kick may have frustrated people looking on after Seánie powered over the gainline but sometimes attacking is done more effectively with the opposition in possession deep in their own territory. Put pressure on them, squeeze them into submission.

Mads was just playing off the team sheet but in a really positive manner. Good game-management by Ian Madigan. Really encouraging.

Argentina are what France were eight years ago: big, powerful forwards who are all comfortable with ball in hand, and their backs are lethal runners. They always play with a lot of passion, which is why our games against them always tend to boil over.

Still, there are flaws. Namibia put pressure on them and they threw loose passes that yielded turnover scores. We must immediately bring the Pumas into the high-pressure zone and hope our winning pedigree comes to bear. We have learned harsh lessons, like at this stage four years ago, so that must count.

Ours has been an ugly rivalry. Two nations trying to develop and climb from the shadow of the established world powers made that inevitable.

Their disciplinary record down through the years wouldn’t be immaculate. They play on the edge. We can’t let them in amongst us. If we are thinking about getting even after a cheap shot, rather than focusing on our processes, we are in trouble.

What has little relevance is 2007. Juan Martín Fernández Lobbe and Juan Martín Hernández remain as the heart and soul of their team but eight years ago our gameplan peaked six months too early.

Now it is still climbing to the zenith. That forces the Pumas to analyse two Irish styles. Are we a kicking or running team? It’s the ultimate double-bluff. If we combine the two, vary it up at the right moments, I can see us getting through what is certain to be a dog fight with more casualties.

Conor Murray has the game to do this. Mads has shown he can delivery as well. Both must play heads-up rugby. If the Pumas sit off, punish them; if they try to squeeze us, go to the sky with Tommy, Dave and Rob. Exploit the space wherever it is. And we can turn the screw, play blood and guts style (see the build up to Rob’s try).

If our backrow, whoever they may be, plays to the same standard as last Sunday then every type of style can be rolled out.

Ireland are more battle-hardened and have an awareness of the line speed required to stop Hernández launching strike runners. Because if they get in behind us they have the offloading ability to score tries.

It’s four weeks ago now but Argentina were superb against New Zealand. I am still incredibly worried by that performance and the fact they have played two seasons in the Rugby Championship. Graham Henry’s influence is also evident.

The scrum and lineout will be massive areas but we have shown we can deal with everything they throw at us. Whoever wins the small margins and the small battles wins the game.

The way our replacements performed last weekend filled me with confidence and further reinforces the Joe Schmidt way of playing. If everyone performs their role, the machine keeps on delivering. We are not the same team without O’Connell, O’Mahony, O’Brien and Johnny but we can still win without them.

The major concern is whether we can back up a big performance. Can Dev repeat that unreal lineout showing? Can Robbie be so imposing? I think the answer in all areas is, yes. This Ireland team have backed up big victories in November and over two Six Nations campaigns.

The difference with Murrayfield this year or Paris in 2014 is they were the last games of tough campaigns. We must improve three more times.

But we still have enough firepower and the players will carry the spirit of Paulie into Sunday and hopefully beyond. We have lost a monumental performer on the field but he remains an influence on the team. We all saw that in Henderson’s carries and tackles, in Toner’s defensive lineout steals. In all of them.

The Joe Schmidt factor comes into play now more than ever before.

That should plant doubt in Argentinian minds. They are uncertain about what’s coming. The Ireland players won’t be. 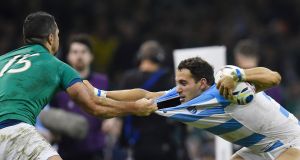 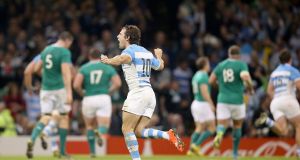