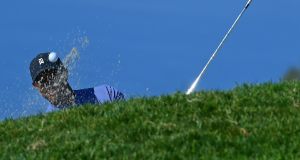 Tiger Woods plays a shot from a bunker on the 11th hole during the first round of the Farmers Insurance Open at Torrey Pines. Photo: Donald Miralle/Getty Images

Rugby is under threat and it’s starting from schools level. So writes former IRFU referee director Owen Doyle this morning as he points to the examples set in New Zealand where participation numbers are falling rapidly. While Irish rugby is in good shape, Doyle writes that it is not immune to similar problems which, if they beset the rugby-mad nation of New Zealand, can have the same affect anywhere. “Don’t doubt it for a moment, but parents are thinking twice about allowing their kids to play and it wouldn’t take too much for that ball to start rolling. Stopping it would be another matter,” he writes. Elsewhere, Ireland under-20s coach Noel McNamara spoke to John O’Sullivan about the scale of the task his team faces in defending their Grand Slam title when they get the Six Nations underway against Scotland next Friday.

Moving on to soccer and Niall Quinn says he is happy to step into the breach as he takes the deputy CEO role at the FAI, even if it is only on a short-term basis. According to the association, Quinn’s role will be a fairly sprawling one with the Dubliner set to have a hand in developing a brighter future for the League of Ireland, helping to improve “player pathways” working with the grassroots of the game and rebuilding relationships with stakeholders, including Government and the media. Meanwhile, our new series begins this morning on Irish people making a living abroad in football with Danny Ledwith first up as he speaks to Aonghus Ó Maicín about combining playing and his football development role in New Zealand. On the pitch, Liverpool made it 22 wins from 23 games last night as Roberto Firmino struck six minutes from time to give them a 2-1 win away to Wolves to remain 16 points clear of Manchester City with a game in hand.