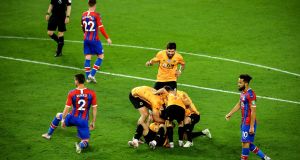 Wolves’ Jonny celebrates with his teammates after scoring their second during the Premier League win over Crystal Palace. Photo: Richard Heathcote/NMC/Pool

Refereeing is one of the most contentious issues in all sports but rugby now has the chance to improve its officiating after Alain Roolland stepped down World Rugby’s match officials manager, writes Gerry Thornley. “The game’s governing body now has an opportunity to perhaps overhaul the structure around refereeing and address the declining standard of rugby officiating. This is one of the biggest worries in the game,” he writes. Also in our rugby pages this morning, John O’Sullivan looks at how foreign fields now don’t look as promising for Irish players as the impact of the coronavirus pandemic leads to less money and less opportunity.

On to soccer and Mikel Arteta hopes Arsenal can get a new deal signed with Pierre-Emerick Aubameyang as soon as possible as the striker’s future remains unclear. Aubameyang’s brace against Manchester City on Saturday guided Arsneal to the FA Cup final but the in-form striker’s future is yet to be resolved. Last night Wolves remained in the European hunt by inflicting Crystal Palace’s seventh straight defeat on them while Everton damaged the hopes of Sheffield United with a second half Richarlison winner.

1 ‘It was pitch black’ - Rescued teenager describes night afloat with her cousin in Galway Bay
2 Inside Meghan and Harry’s broken relationship with the royal family
3 Anne Doyle: ‘Depression? I know what it is, and it’s a b*tch’
4 Inside the O’Brien Fine Foods factory in lockdown Kildare
5 David McWilliams: It is time for a major property reset
6 Over 400 complaints from migrant workers at meat plants lodged with WRC
7 A million trees, including 400,000 oaks, to be destroyed this week
8 Irish team wins international competition with dementia app
9 ‘I’m going to ask you something,’ Sorcha goes, ‘Have you two been sleeping together?’
10 Schools urged not to demand clean uniforms each day
11 Jennifer O’Connell: Why is Trump afraid of Kamala Harris?
12 36 hours on Northern Ireland’s Causeway Coast: ‘Everyone is having a wild time’
13 Garda killer Aaron Brady will be almost 60 by time he leaves prison
14 Britain fails yet again to take Ireland into account
15 Shane Kenny convinced Achill water contamination triggered medical relapse
16 Politicians opt for staycations where peace may be hard to come by
17 Conor Pope’s staycation diary: ‘It’s like I’m staring at a Polaroid of my childhood holidays’
18 Aaron Brady, the man who said with pride he was a cop killer
19 Biden-Harris: A force to be reckoned with
20 Inside Meghan and Harry’s new $14.7m nine-bed, 16-bath California home
21 The hatred of HP Lovecraft: Racist, anti-Irish bigot and horror master
22 Homeless man spoke about Covid-19 challenges month before death
23 Coronavirus: 67 additional cases but no new deaths reported in the State
24 Covid-19: Spain closes nightclubs and limits smoking; Paris declared a high-risk zone
25 Mike Pence fretting as Kamala Harris shakes up Republicans
26 ‘It was like somebody put a furnace in my core’: Michelle Obama on menopause
27 Worst sporting moment: White knuckle ride on a hate-filled night at Windsor
28 Ban on beer kiosks draws ire as Berlin dances on edge of volcano
29 Warning to beach-goers over venomous weever fish hiding in the sand
30 Housing activists assist tenants to re-enter property following eviction
31 Coronavirus: Number of outbreaks in Irish homes rising for five straight weeks
32 Fresh uniform every day? Some schools do solo runs
33 ‘My city roof terrace saved me in lockdown’
34 Landlords’ group concerned with manner of Dublin eviction
35 Carrick-on-Shannon native left reeling by plan to raze home
36 Lebanese roots keep things in perspective for Michael Cheika
37 Another Life: Arrival of great skuas may alter seabird balance on Clare Island
38 ‘A smoking gun’: Infectious coronavirus retrieved from hospital air
39 Staff at Dublin and Cork airports to vote on work practice changes
40 Safety official urges some water users to carry personal locator beacons
Real news has value SUBSCRIBE