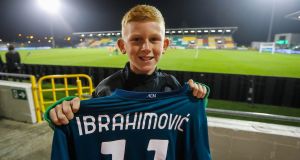 Rory McIlroy’s bid to secure a fifth Major title - six years after his last - got off to a fine start yesterday, as he shot an opening round of 67 on the first day of the 2020 US Open at Winged Foot. McIlroy’s three under par round leaves him in a share of fifth place,two strokes behind leader Justin Thomas, who took advantage of surprisingly favourable scoring conditions and opened with an eye-catching 65. Matthew Wolff, Thomas Pieters and Patrick Reed - who enjoyed a hole-in-one on the seventh - are a shot off the lead. The rest of the Irish contingent in New York struggled however, with Shane Lowry and Graeme McDowell both shooting 76s and amateur James Sugrue a 78 - all three will have work to do to make the cut. Lowry’s second round gets underway at 12.45pm today, while McIlroy’s group and Thomas’s group - which also contains Tiger Woods - tee off simultaneously on the first and 10th at 6.27pm. You can follow all of the second day’s action via the Irish Times liveblog today, with John O’Sullivan starting at around 1pm before Ruaidhrí Croke guides you deep into the night.

There was to be no fairytale in Tallaght last night, as Shamrock Rovers were beaten 2-0 by AC Milan in the Europa League qualifiers. Zlatan Ibrahimovic opened the scoring for the visitors after 23 minutes, with Hakan Canhanoglu’s second half strike putting the game to bed. Afterwards, boss Stephen Bradley paid tribute to his side’s efforts: “We have created three really, really good chances against a top team and when you consider the quality of the players and the intensity they play at, I thought we were outstanding.” Elsewhere Dundalk progressed thanks to a 1-0 win over Inter Club d’Escalades in Andorra, while Tottenham scraped past Lokomotiv Plovdiv - Jose Mourinho’s side 2-1 winners in Bulgaria.

1 Schools instructed to stop using Virapro branded hand sanitiser
2 Two hundred Irish retailers for all your online Christmas shopping
3 Father unaware partner and baby dead until gardaí called to raise alarm
4 Nine charged following clashes between gardaí, anti-lockdown protesters
5 Reasons to believe Covid-19 pandemic will ease next spring, says health expert
6 How smart shelves help retailers up the in-store experience for customers
7 My Irish passport has calmed tempers at borders and airports
8 Large crowds gather on Dublin’s Grafton Street on eve of lockdown
9 No doctor, no pharmacy, no supermarket: I’m moving to an island
10 Garda checkpoints turn motorists back, traffic volumes drop
11 Young people ‘sick of being told what not to do’, says WHO’s Mike Ryan
12 Dublin residents seek removal of ‘distasteful’ cycle bollards
13 John Gilligan arrested along with two others in southern Spain
14 Poots’ comments about Covid-19 would be funny if they were not so serious
15 Diarmaid Ferriter: We have been infantilised by Government’s latest move
16 Lockdown meals: 50 great Irish restaurant food boxes to go
17 International Dublin Literary Award: Anna Burns becomes first Irish woman to win €100,000 prize
18 Dáil approves transfer of mother-and-baby home records to Tusla
19 Borat 2: Rudy Giuliani’s trouser-reaching scene is the work of a daring young woman
20 Life under Level 5: Where can I go, who can I see, what is closed and what is open?
21 HSE says it has stabilised staffing situation in nursing home hit by Covid-19 outbreak
22 US election: Democrats target a major Senate upset in South Carolina
23 Guinness brings out a non-alcoholic version of the black stuff
24 Warning that small shuttered shops may reopen in campaign of disobedience
25 Why work more than 15 hours a week?
26 ‘You guys are amazing’: Matt Damon’s message of support to Temple Street children, families and staff
27 Emergency staff drafted into nursing home at centre of Covid-19 crisis
28 Galway nursing home sees 26 out of 28 residents test positive for Covid-19
29 How long can Government afford to keep State pension age at 66?
30 Developer’s impeccably restored Fitzwilliam Square Georgian for €3.5m
31 Shock at golf clubs as sport faces shutdown in Level 5
32 Six further outbreaks of Covid-19 in nursing homes and community hospitals, Nphet says
33 Brexit trade deal is ‘doable but difficult’, says Coveney
34 Bus drivers faced ‘mayhem’ as passengers tried to travel, says union
35 These lemon cheesecake bars are a little slice of sunshine
36 People will need to get used to a ‘simpler life’ because of Covid-19, says prominent medic
37 New citizens to sign affidavit of loyalty instead of attending ceremonies, minister says
38 Thousands of gardaí mount checkpoints and patrol parks, beauty spots
39 Body of woman and baby boy found in separate locations near Lucan
40 Poor wifi, home distractions: Students on the reality of online classes
Real news has value SUBSCRIBE