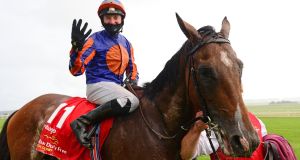 Séamus Heffernan, seen here after Santiago’s win in the Dubai Duty Free Irish Derby, has received a 22-day suspension for his use of the whip during the French Derby at Chantilly on Sunday. Photograph: PA Wire

Séamie Heffernan is set for a lengthy spell on the sidelines after picking up a 22-day suspension for his use of the whip in the Prix du Jockey Club at Chantilly on Sunday.

Heffernan finished in seventh place in the French Derby aboard the Aidan O’Brien-trained Order Of Australia, with the stewards ruling he had exceeded the five-stroke limit that exists in France by six strokes.

Heffernan – who last weekend won the Irish Derby with Santiago – rode at Epsom on Saturday and was already due to sit out 14 days on his return to Ireland as a result of quarantine requirements.

He said: “I got a fairly strong suspension, but there’s strict rules there. My horse was going to go over the rail, I had white paint all around my boot, but those are the rules and that’s the way it was.

“He was on the rail and going to hang in over the rail and I thought he was going through it, so I was using my stick for safety reasons. But the rules are what they are. I’m very disappointed and very sorry it happened, but there you go. Twenty two days is what they gave me, but there’s a lot worse things going on in the world.

“I’m really, really sorry that it probably looked bad, but I felt I had to do it at the time to stop the horse colliding with the rail.”

Heffernan is unlikely to appeal, adding: “The people have jobs to do and they are usually very good and very appropriate, and usually very right. I don’t see any reason for appealing, I wouldn’t like to be trying to override their authority, they have the authority to make the decision and whether it was right or wrong, it was made.

Heffernan has for a long time been a key part of the O’Brien team and is delighted with the stable’s current run of success, which saw victory in the Epsom Derby added to the Irish Derby as Serpentine made all at Epsom under a fine front-running ride from Emmet McNamara.

He had special praise for McNamara, who was winning his first race of any kind since October.

He said: “The horses are running well. We’ve won the English and Irish Derby and we’ve won the Oaks, things are going pretty good for us.

“It couldn’t have happened to a nicer fella. He is and always has been a very capable rider, but opportunities are not out there. He’s in a good yard with good horses and the opportunity came and he was well up to doing the job.”