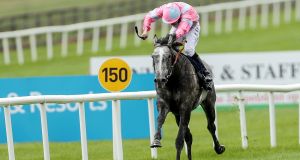 Phoenix of Spain and Jamie Spencer take the 2000 Guineas at the Curragh in 2019. Photograph: Laszlo Geczo/Inpho

RTÉ have confirmed they wiill broadcast the 1,000 and 2,000 Guineas live from the Curragh, as return of Irish racing moves closer.

Racing in Ireland has been postponed since Wednesday March 25th due to the coronavirus crisis, however the sport is set to resume behind closed doors on June 8th with a Monday night card at Naas.

The weekend of Friday June 12th and Saturday June 13th then sees the running of the first Classics of the flat season at the Curragh, with the action available to watch on terrestrial television.

RTÉ will show Friday’s 2,000 Guineas and Saturday’s 1,000 Guineas, with coverage starting at 6pm on both evenings.

The broadcaster have also confirmed they will be showing live racing every Friday, Saturday and Sunday evening until July 13th in a special one hour programme, as well as their usual coverage of the Irish Derby weekend and The Oaks.

RTÉ have said their coverage, “will comply fully with Horse Racing Ireland’s Covid 19 Protocols around social distancing for behind closed doors meetings.”

On the announcement, HRI chief Brian Kavanagh said: “RTÉ has always been very supportive of racing in Ireland and today’s announcement confirms that commitment.

“The new one-hour evening programmes are an opportunity for Irish racing to attract people to our sport and educate those new fans on what makes racing so exciting.

“We appreciate the flexibility shown by the RTÉ team around the new dates for the Irish Guineas in June and really look forward to their live coverage of our opening Classics, as well as this new departure.”

RTÉ Racing in June on RTÉ2 and RTÉ Player: