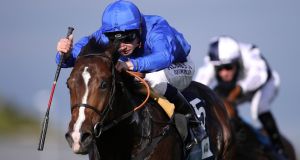 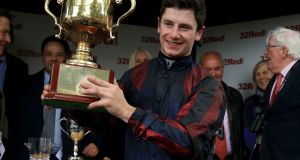 Oisín Murphy doesn’t mind selfies. He’s used to them. He is after all probably the hottest young jockey in Europe right now. But it’s nothing to do with any self-absorbed millennial cliché.

“The way I look at it, if I stop for a picture with kids they could be the next anyone, the next Mick Kinane; or they might own 20 horses in 20 years time,” he says. “And I was that child asking jockeys for a photo – not so long ago either.”

That’s true. Murphy was 23 last week. He quickly celebrated by winning his sixth Group One race of 2018 on The Tin Man at Haydock. In less than a year he has won at racing’s elite level in five different countries. Today he’ll try to make it six on home ground at Leopardstown.

Should Roaring Lion justify odds-on favouritism in the €1.25 million QIPCO Irish Champion Stakes it will be another step on a meteoric career path that has taken Murphy from Co Kerry to the rarefied heights of international racing.

Murphy is number one jockey to Qatar Racing, the creation of Roaring Lion’s owner, Sheikh Fahad, who sponsors the big race. His own horse winning his own race is a perfect result for the Sheikh, and not just because it will add further to the value of a colt officially rated the best of his generation in Europe.

That’s a level of expectation to test even the most mature of riders. Murphy’s selfie outlook though reflects both youth and a reassuring perspective that belies his years. Murphy’s sprint to stardom has been as swift as Roaring Lion’s change of pace. But few believe he is destined for anything but a marathon stay at the top.

Expectation has surrounded Murphy almost from when he first threw his leg over a racehorse. He was 14 and at the stables of his uncle, Jim Culloty, one of only five men to both ride and train a Cheltenham Gold Cup winner. Exceptional horsemanship was obvious to him from the start. It’s rooted in showjumping, Murphy’s first love growing up in Ballyhar, about seven miles outside Killarney. For his fourth birthday he was given a first riding lesson in nearby Milltown. “They wouldn’t take you any younger!” he recalls. “But I always wanted to be a showjumper.”

Watching his uncle win the Gold Cup three times didn’t alter that ambition. Neither did it budge when Culloty started training in north Cork, or when his parents, John and Maria, moved from Kerry and found themselves living close by.

“My Dad owns land in Cork so we all moved there when I was 11. I went to secondary school in Cork (Coláiste Mhuire) and played football for Buttevant. But my parents split up when I was 14 so I moved in with Jim,” Murphy says. “That’s when I started riding racehorses.

“I got a buzz off it. Davy Russell used to do a lot of schooling – and riding up with them I got the jump jockey bug. But I was never going to be heavy enough to be a jump jockey.”

Murphy persevered with school long enough to do his Leaving Cert but his future on the flat was already mapped out. His uncle decided on Andrew Balding as the trainer best equipped to nurture the precocious youngster. Balding warned he had other apprentices. Culloty simply asked if there would be race rides if the new boy proved good enough. Assured there would be, he sent his nephew to England.

Within a year Murphy hit the headlines with a 9,260-1 four-timer on Ayr Gold Cup day. That was five years ago. Since then he has developed from teenage tyro to one of Europe’s top-rated jockeys.

There’s a maturity and assurance to Murphy, however, that helps explain Sheikh Fahad’s decision to appoint him Qatar Racing’s jockey at just 20.

A notably fluent young man, reports once suggested Murphy’s self-possession mightn’t make him too popular with some of his colleagues. You suspect it doesn’t cost the Kerryman any sleep. “What’s hard is dealing with the bad days,” he says. “I’ve been lucky recently. But in April-May time for instance things didn’t go as I wanted. Someone asked the other day was I afraid of losing my job. I wasn’t actually. But you still have to go out and pretend everything is fine when it isn’t.”

It’s a level-headed outlook to suggest this is one Oisín unlikely to be caught in the big race headlights. And which makes ‘selfie’ fame a doddle.