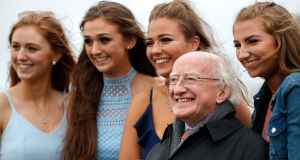 The President was on hand to present the Galway Plate to the winning connections in Ballybrit.

However, he did not take part in an official opening of the new Wilson Lynch building at the Ballybrit track, a €6m facility which includes a large betting hall.

Wednesday’s big race, which was sponsored by the Tote, the racing industry’s own gambling company, had a prize-fund of €250,000 and was won by Clarcam, a 33/1 outsider from Michael O’Leary’s Gigginstown House Stud.

Mr Higgins, who said in a radio interview on Sunday that he would like to see gambling advertising removed from sport, did not elaborate on that view in a brief media interview at the racetrack.

With the presidential election looming, Mr Higgins quipped he was gearing up for the political contest. “I always enter races in a very fit condition.”

A regular attendee at the Galway festival, he welcomed the improved weather conditions “and I hope the numbers will hold up as well because it’s a very enjoyable and very important event in the summer in Galway,” he said.

“What’s more important over the years is that people come back for the races; it’s tradition.”

Former taoiseach Brian Cowen was among the punters at Ballybrit, and he too an eye on the race for the Áras .

“Obviously, he [MR HIGGINS]is the incumbent and he is the favourite. He’s in the gate and he’s going again,” Mr Cowen said.

“I don’t think it reflects on the dignity of the office whether it’s contested or not as long as the person that’s there is of sufficient stature to fill the job and I think that’s always been the case down the years, to be honest, whether there has been elections or not.”

Back on the track, trailblazing jockey Rachael Blackmore had her first winner of the week, landing the handicap hurdle with Black Key - also in Michael O’Leary’s colours.

After her struggles in the amateur ranks Blackmore went professional in March 2015 and has flourished since.

The 29-year-old Tipperary native did not come from a horse racing background. She was born into a farming family in Killenaule. There were horses on the land but little to suggest she would develop into a champion jockey.

The original dream was to become a veterinary surgeon. But when that went by the wayside Blackmore chose to study science after she left Loreto College in Clonmel.

“In school I always wanted to be a vet but my academic performance wasn’t good enough for that. So, I studied science in UCD and then I did equine science in UL,” said Blackmore, whose mother Eimir is a teacher, and father Charles a farmer.

Blackmore has thrived this season and came to Galway boasting 26 winners from her 153 rides, taking an early lead in the jockeys’ championship for the 2018/2019 National Hunt season.

“I never experienced a difference for a woman coming through. There are less women but I never felt discrimination just because I am a girl.

“I don’t see the male and female thing as a talking point anymore. It’s gone, there are loads of girls doing well.”