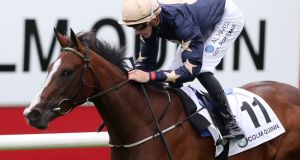 Oisín Orr has been called up to ride The Lir Jet, the second-favourite, in the Group One Phoenix Stakes at The Curragh on Sunday after Ben Coen, who was originally booked to ride, was stood down with a broken collarbone following a fall at Sligo on Friday afternoon.

Orr shared Ireland’s champion apprentice title with Andrew Slattery last season after riding a double on the final day of the campaign, but cannot have expected to get such a high-profile chance in a Group One so soon afterwards. His only previous rides at the highest level were aboard Katiba, a 66-1 chance, in the Irish 1,000 Guineas in June and Search For A Song, at 50-1, in the Tattersalls Gold Cup less than a fortnight ago.

“He [Coen] is not riding on Saturday, I know that much, so we’ve booked Oisín Orr for Sunday,” Michael Bell, The Lir Jet’s trainer, said. “Of the riders available, he was the one that Sheikh Fahad [al Thani, the colt’s owner] wanted so he’s the one we’ve plumped with.”

Sheikh Fahad bought The Lir Jet after the colt broke the all-aged track record for five furlongs on his debut at Yarmouth in early June, and Oisín Murphy, his retained rider, was aboard for his subsequent victory in the Norfolk Stakes at Royal Ascot and a narrow defeat by Ventura Tormenta in the Prix Robert Papin at Chantilly.

Coen was originally booked to ride The Lir Jet after Murphy was ruled out because of the two-week quarantine period for travellers from the UK to Ireland. Ventura Tormenta, who reopposes The Lir Jet on Sunday, will also have a new rider in Declan McDonogh for the same reason.

“It’s definitely not a positive,” Bell said, “because obviously Oisín [Murphy] knows the horse, but conversely, the jockey [Orr] knows the Curragh like the back of his hand. Obviously Sheikh Fahad would like and we would have preferred to have the jockey who knows the horse, but it is what it is. But it’s a big chance for Oisín Orr to impress in a Group One and hopefully he will do so.

“It looks like being a very good race and it’s not only the Richard Hannon horse [Ventura Tormenta], there’s also Steel Bull [last week’s Molecomb winner at Goodwood], the horse that won the Railway Stakes [Law Of Indices] and then a battalion from Coolmore. It’s a deep race.”

Steel Bull is the 9-4 favourite in the early betting for Ireland’s first Group One juvenile contest of the year, with The Lir Jet on 7-2 and Ventura Tormenta at 5-1.

Coen will miss out on the ride aboard The Lir Jet following a serious incident at Sligo, which saw four of the 12 runners in a 10-furlong handicap stumble and unseat their riders independently at the same point on the track. Ideal Pal unseated Donagh O’Connor on the right-handed bend just past the winning post on the first circuit, while Multamis (Coen), Sicario (Ronan Whelan) and In From The Cold (Joey Sheridan) all stumbled at the same point shortly after crossing the line.

“Ben Coen sustained a fracture of his clavicle,” Dr Jennifer Pugh, the senior medical officer for the Irish Horseracing Regulatory Board, said. “He will be sidelined for a short period of time. All other riders are okay.” – Guardian