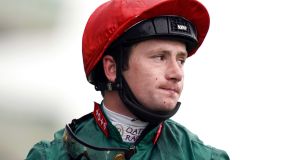 Irish jockey Oisín Murphy has been handed a three-month ban by the French racing authorities after testing positive for cocaine.

Murphy, 25, and from Killarney in Co Kerry, is the reigning British champion jockey and one of racing’s brightest young stars.

He failed a drugs test at Chantilly on July 19th, news of which emerged last month.

Murphy appeared to be facing a six-month ban but on Wednesday France Galop imposed a more lenient suspension and the Irishman is ruled out from December 11th to March 11th.

It means he will be able to return to action before the British turf season starts again on March 27th next year.

A France Galop statement on Friday said: “This decision takes into account the defence and scientific evidence presented by the jockey and his counsel during a hearing on November 25.”

At that hearing Murphy reportedly said the positive was due to “environmental contamination” having had sex with a user of the Class A drug.

In a statement, Murphy said: “I would like to thank France Galop and the panel of Commissioners for a fair hearing and for accepting the evidence I presented that I had not taken cocaine.

“This evidence included my hair sample results – the results of which I am making public today – and an expert witness statement from an eminent toxicology and anti-doping expert.

“Whilst I am obviously disappointed that I will still have to serve a three-month suspension, I am pleased the commissioners accepted the evidence presented and am hugely relieved to have been cleared of taking cocaine.

“I respect the rules of France Galop, respect their decision and will not be appealing. Despite my relief, I regretfully put myself in a situation whereby cocaine has been able to filter into my system through environmental contamination and must live with the consequences.

“As a professional sportsman I cannot put myself in a similar situation again.

“Even though I have been exonerated from taking cocaine, I would like to take this opportunity to apologise to Sheikh Fahad al Thani, David Redvers and Andrew Balding and thank them for their support.”

Murphy has been champion jockey in Britain for the last two years and is widely regarded as the likely heir to Frankie Dettori as racing’s most recognisable face when the veteran Italian eventually retires.

The Irishman tested positive after riding The Lir Jet at Chantilly on July 19th. Despite the French rules granting him medical anonymity until the end of the process, Murphy opted to go public on the matter at the beginning of October.