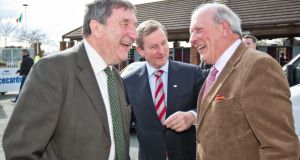 With almost 140 runners, the final Curragh card of 2016 won’t lack for competition and with his owner’s hat on Horse Racing Ireland’s chairman Joe Keeling (right) will hope Texas Rock can provide him with a positive start to the week.

Keeling is due to appear before the Oireachtas cross-party Agriculture Committee at 2.30pm on Thursday in relation to Brian Kavanagh’s controversial reappointment for a third term as HRI’s chief executive.

It is anticipated other HRI board members will join Keeling before the committee.

Keeling has come under sustained fire for his role in Kavanagh’s reappointment.

The job wasn’t advertised and the appointment was approved by the Minister for Public Expenditure Paschal Donohoe and Minister for Agriculture Michael Creed without the HRI board having discussed it first.

Racing’s ruling body has been severely criticised in recent weeks and Senator Paul Daly, the chairman of Kilbeggan racecourse, declared that “irreparable damage” has been done to racing’s image.

Prior to that, racing officials are remaining tight-lipped about any potential €4.8 million boost to racing in tomorrow’s budget.

In 2014 the Minister for Finance Michael Noonan pledged to make an extra €6 million available to the Horse & Greyhound Fund over the following three years.

However while Noonan is still Minister for Finance there is a different make up to government now and a HRI official said: “Every year we have to wait and see what’s in the budget. No one knows what’s in it until it comes out.”

West Ham rue Fabianski fumble as Liverpool strike from behind 22:13
Champions Dundalk march on as Cork City remain goalles 22:00
New man Marshall sees Shamrock Rovers past Waterford 21:39
City Island to return to hurdles and take on Paisley Park in stayers’ 20:50
McIlroy takes his foot off the pedal and will skip the Honda Classic 20:01
Here is your handy guide to sport on television this week