Cantillon launches bid for a seat in Seanad Éireann 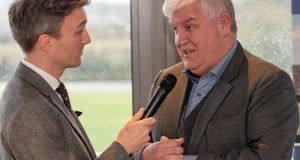 Journalist Thom Malone talks to Dermot Cantillon, chairman of Naas racecourse, who is bidding for a seat in the Seanad. Photograph: Morgan Treacy/Inpho

One of Irish racing and breeding’s most high-profile administrative figures, Dermot Cantillon, has decided to run for election to the Seanad.

Currently chairman of Naas racecourse, a former chairman of Tote Ireland, and a former long-serving board member of Horse Racing Ireland, Cantillon will bid for one of the 11 seats selected by the agricultural vocational panel.

He said on Friday that he’s doing so due to concern about the outlook for rural Ireland in general but also frustration at the thoroughbred industry’s lack of influence within politics.

“I’ve been watching a lack of influence politically for a while and it frustrates me because we have a really good industry and we’re lucky to have it in Ireland.

“It’s an important component of rural Ireland. It provides good employment and great opportunities and the whole industry is a net contributor to the economy. It’s something we can defend very easily but there’s nobody there to defend us so I think we get a lot of negative press,” he said.

Cantillon owns and runs Tinnakill House Stud in Co Laois alongside his wife, Meta Osborne, currently vice-chairperson of HRI, an ex-Turf Club senior steward, and a former president of the Veterinary Council of Ireland.

There has been considerable unease within Irish racing on the back of Sinn Féin’s success in last weekend’s general election and the prospect, though it now appears to be diminishing, of the party entering government.

Reference has been made to comments by the current Sinn Féin spokesman on justice and equality, Martin Kenny, in 2017 when he called on the then government to end its support of the industry unless reforms were carried out.

Kenny also commented about the amount of State finance that goes towards prizemoney which he said ends up with an already well-off and elite sector of society.

The Horse & Greyhound Fund was set up in 2001 and has been central to Irish racing’s finances since then. The sector will receive €67.2 million from the State this year.

However Cantillon appeared to play down concerns about Sinn Féin potentially disrupting that financial supply in future.

“That’s only an individual within Sinn Féin. I think Sinn Féin are pragmatic. I think if Sinn Féin were in government and a logical case is made on the positivity that we bring to rural Ireland I couldn’t see a scenario where they wouldn’t continue the support that’s being given.

“It would make no economic sense. The only reason would be out of spite.

“I can’t see an economic reason why you’d take away the money. Take it away and there’s less money in the industry. Then the multiplier effect wouldn’t happen and there would be less money going to the exchequer for hospital beds and council houses,” he said.

John Magnier was appointed to the Seanad by the then taoiseach Charles Haughey in 1987. The Coolmore Stud supremo famously made just a single speech during his time in the Upper House of the Oireachtas.

Cantillon is pursing the panel route to the Seanad which has 60 members. The taoiseach of the day nominates 11 and six are elected by the National University of Ireland and Trinity College.

The remaining 43 are decided by about 1,200 politicians, including councillors, from five special panels of nominees. One of those panels is agriculture.

Many TDs defeated in last week’s general election are expected to seek nominations to run for the Seanad but Cantillon says independents have a history of success in the panel system.

“The original thinking within the vocational groups was that people with expertise in the industry would be elected. Over the years it has been hijacked by politicians. It’s become the norm when actually it wasn’t the intention,” he said.

Cantillon has been nominated by the Irish Thoroughbred Breeders Association, of which he was chairman in 2004-05.

“If you’re in the Seanad you can become a member of the agriculture committee and committees within the Orieachtas have more and more powers.

“If you’re in the environment of the Oireachtas you can influence people in an informal way. You can also initiate legislation and fine-tune legislation coming through,” he said.

Nominations to a nominating body close in ten days time. A postal ballot process runs from March 16th until an 11am deadline on March 30th.