Positives for Ireland heading to Twickenham; can Stephen Kenny ever catch a break? 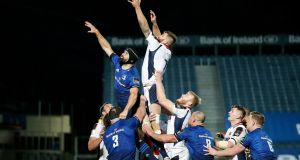 Playing England at Twickenham, no matter what the circumstances, is always going to mean that little bit more and this Saturday at 3pm Ireland will look to build on Friday’s win over Wales and reverse the trends of the last two trips. In his column this morning, Gerry Thornley writes that there are positive signs in Ireland’s play and this Saturday will be a real test of that. “Ireland have some demons to exorcise next Saturday and bringing more of an unpredictable attack - admittedly on the basis of the kind of strong set-pieces and physicality in the collisions witnessed against Wales – would be a help,” he writes. The impressive debut of James Lowe has been cause for encouragement for Andy Farrell’s side and the winger says that, despite the absences of Johnny Sexton and Robbie Henshaw, Ireland can show up physically against England. Finally, in last night’s Pro14 action, Dan Leavy was man of the match for Leinster as they racked up 50 points in a trouncing of Edinburgh while Ulster breezed past Zebre with nine tries.

Moving on to soccer and Ireland manager Stephen Kenny must be wondering when he can possibly catch a break. Yesterday, James McClean and Matt Doherty became the latest Ireland players to test positive for Covid-19 meaning that, heading in to Wednesday night’s clash with Bulgaria, Kenny is now missing 14 of the 24 players who have played under him so far. It must be noted as well that Ireland have been hit particularly hard by the virus given the fact that, of our nearest neighbours, England, Wales and Northern Ireland have not reported any cases while Scotland have had just one. Elsewhere, Hollywood actors Ryan Reynolds and Rob McElhenney have had their offer to buy Wrexham approved by over 90 per cent of the club’s supporters’ trust.

1 Reopening hospitality sector will mean limiting Christmas gatherings, Nphet warns
2 Admission of mistake in Oxford vaccine dose raises doubts over reliability
3 Varadkar told McEntee that Woulfe would make ‘good judge’, Dáil hears
4 Wild Mountain Thyme director says Irish accents are hard to understand
5 Coronavirus: 335 new cases and three further deaths
6 Michael Flatley’s house clear-out: from Hannibal Lecter mask for €85,000 to ‘gorgeous cushions’ for €190
7 Boy (4) left in hospital for over two years due to Tusla and HSE failings, report says
8 The Crown’s Josh O’Connor: ‘I’m a republican. I’m not interested in the royal family’
9 Ranelagh’s brand new street with three-beds from €1.325m
10 400 – yes, 400! – Irish retailers for all your online Christmas shopping
11 Andy Farrell hands Billy Burns first Ireland start against Georgia
12 Cliff Taylor: Deal or no deal we are now heading for a hard Brexit
13 Black Friday hotel deals: some of the best offers from around Ireland
14 Move to EU or face disruption, City of London is warned
15 Q&A: What restrictions are going to be lifted next week?
16 ‘He’s Jekyll and Hyde’: The inside story of an Irish barrister and conman
17 More walks and less TV could help limit Covid spread at Christmas – WHO doctor
18 Saoirse Ronan and Daniel Day-Lewis on ‘greatest 21st-century actors’ list
19 Covid clause: No restrictions on Santa as Government says Christmas present delivery ‘essential’
20 Newton Emerson: Unionists should declare Ireland is worked out, Biden can keep it that way
21 Michael J Fox: ‘In the wheelchair, I’m luggage. No one listens to luggage’
22 Last orders for Rí-Rá nightclub and The Globe after green light for Central Hotel revamp
23 Breakfast in Ballsbridge: When Audrey Hepburn met her dad in Dublin
24 Karlin Lillington: How I managed to cut my mobile phone bill by at least half
25 West Cork castle shell sells in weeks for around €2.7m
26 Woman married six months when body was found
27 ‘Being in Ireland feels like winning the lottery’: Syrians arrive after delay due to Covid
28 Four new statues to end Trinity Long Room’s ‘men only’ image
29 Ireland could lose out as France lays claim to most of €5bn Brexit compensation fund
30 Ireland ‘will do well’ out of €5 billion Brexit fund, says Coveney
31 Miriam Lord: The Dáil's answer to John Wayne overcooks the ham slice, by slice, by slice
32 Derry bus firm cancels shopping tour to Dundrum after ‘double checking’ rules
33 School leggings controversy: Anatomy of a social media firestorm
34 Up to 2,000 cancers may be ‘lost’ because of Covid disruption
35 Soldier with exemplary record jailed for ‘outrageous assault’
36 Louise O’Neill: ‘Fairytale of New York makes me grit my teeth’
37 Fiona Reddan: Who’s afraid of Revolut? Not AIB and BOI it seems
38 Original villa joins Dublin 8 revival for €825k
39 GAA Statistics: Can Cavan and Thomas Galligan beat Dublin with the long kickout?
40 Fenergo named Irish technology company of the year
Real news has value SUBSCRIBE