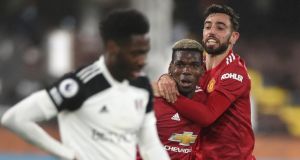 After Leicester had beaten Chelsea on Tuesday and Manchester City saw off Aston Villa in the early match last night the pressure was on Manchester United when they met Fulham at Craven Cottage but, thanks to Paul Pogba, Ole Gunnar Solskjaer’s side reclaimed their place at the top of the Premier League. After going behind early to a strike from Ademola Lookman, United responded through Edinson Cavani and then Pogba struck a pearler from 25 yards to seal the three points with the manager full of praise for his French midfielder afterwards. Up in Scotland the woes of Celtic continue after they limped to a draw against Livingston with Scott Brown seeing red shortly after coming on from the bench. However, manager Neil Lennnon says he will not walk away from the job. Meanwhile, in Spain, there was a shock for the ages as semi-professional side Alcoyano knocked the mighty Real Madrid out of the Copa del Rey in extra-time despite being down to 10 men.

Moving to rugby and John O’Sullivan writes in his stats column this morning that Gavin Coombes and Rhys Ruddock are ticking all of the boxes for inclusion in the Ireland squad. “In a quirk of fate they also share several similarities statistically in examining the season to date, possessing overlapping qualities,” he writes. With the Six Nations approaching, competition for spots is heating up and, with Tadhg Furlong out since last year’s competition, Ireland have leaned heavily on Andrew Porter who has responded to the call. This weekend he will be part of the Munster side to take on Leinster in a rivalry he feels is as strong as ever. Meanwhile, Garry Ringrose and Béibhinn Parsons were named Rugby Writers Players of the Year yesterday.

5 NTMA to seek answers from Davy after ‘very serious’ reprimand

6 Home office, home bar and scope for another home alongside for €1.55m

8 We said: ‘This is life and death, and we owe the Irish people’

10 Gordon Elliott should take break to ‘get life back in order’, says Ted Walsh

14 ‘My husband is unemployed. Where will he go if I leave him for my business partner?’

17 Long Covid in children: New data is cause for concern, scientists say

23 Michael Harding: ‘Thank you for your love,’ I wrote to a friend. Then I tore it up

25 Three arrested as gardaí break up street party in Limerick

26 Rupert Murdoch at 90: Fox, succession and ‘one more big play’

27 Bill Gates: ‘I’m not trying to take anything away from Greta Thunberg, but...’

28 All Creatures Great and Small: Who was the real James Herriot?

31 Summer tourist season at risk with Covid passports months away

32 Róisín Ingle: I told my children about my new handsome friend. They accused me of cheating

33 Irish in Australia: ‘It’s scary here, not able to visit home at the drop of a hat’

38 Covid-19 one year on: The story of the virus in five infographics