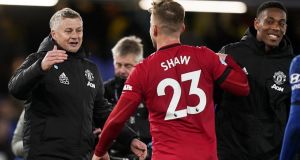 Ole Gunnar Solskjær celebrates with his players after their Premier League win over Chelsea. Photo: Will Oliver/Getty Images

Pints and sporting occassions. They go hand in hand and even more so these days with the multitude of alcohol company sponsors around teams and competitions. So why then, are rules around drinking pints different when it comes to different sports and different countries? Why, for instance, can you drink a pint in your seat at a rugby match in the Aviva Stadium but, if you try the same thing at a football match in the same ground you will be stopped? And is drinking pints in your seat at a match all its cracked up to be? Over the course of the first two Six Nations matches in Dublin some fans have thought that it certainly isn’t with complaints about their view being blocked by a constant stream of people in and out of the bar. In this week’s consumer column, Ruaidhrí Croke explores the topic. Meanwhile, in the travel section of this week’s pages we look at how to get to the Irish Open in May, how to get tickets and where to stay.

Moving on to matters on the rugby pitch and Gerry Thornley writes in his column this morning that England are primed to show their very best when Ireland come to London on Sunday. “A good team has to find different ways of winning, and while there could be plenty of rain about this weekend, it’s likely we’ll see more of England’s potent running game,” he writes. That running game is a particular danger posed by this England team and no more so than in the form of the lightning quick winger Jonny May who John O’Sullivan has had a look at this morning. May scored two tries in England’s loss to France on the opening weekend and if Ireland afford him any space at all they could be in for a long afternoon at Twickenham. Sunday’s match will be the first time Andy Farrell goes up against his native country – and his son – as a head coach and yesterday Leinster scrum coach Robin McBryde said Farrell will be judged only on results and not the style of play.

1 Restarting Ireland: When and how will we ‘get back to normal’?
2 Coronavirus: Trump warns of ‘a lot of death’ in United States next week
3 Mary Lou McDonald: This crisis shows that Sinn Féin was right
4 Man shot dead in Belfast was suspect in Keane Mulready-Woods murder
5 Coronavirus lockdown steps could remain into winter, says expert
6 Nuns, non-virgins and a serial killer: Sharing stories through nature in west Cork
7 Tuberculosis vaccine ‘potential game-changer’ in Covid-19 fight
8 Infected but feeling fine: the unwitting coronavirus spreaders
9 An ‘Asian flu’ pandemic closed 17 Dublin schools in 1957
10 Covid-19 testing: Irish pharma firms source raw material to make reagent
11 Coronavirus: Situation in Ireland ‘misrepresented’ because of limited testing
12 Coronavirus: Another 17 deaths and 331 new cases reported
13 TV Guide: 24 of the best TV shows to watch this week
14 ‘My fiancé is addicted to weed and I can’t cope anymore’
15 What is Houseparty, the app everyone’s talking about – and not in a good way?
16 Fintan O’Toole: Earth has a toxic virus – us
17 Doing the coronavirus rounds with Joe the postman in Dublin 3
18 Dublin deserted: Coronavirus turns city into ghost town
19 ‘This is war’: Irish health workers on their Covid-19 crises
20 David McWilliams: We must loosen up on financing pandemic spending now
21 Man arrested after reportedly threatening staff in Dublin shop
22 Coronavirus: Zoom hackers target GAA web training with porn images
23 Irish woman in Sweden: No lockdown, little distancing, people still shaking hands
24 Taking out the bins and hanging up the laundry have suddenly become thrilling activities
25 Pat Leahy: Small parties seem intent on fleeing from government
26 Coronavirus Q&A: How to shop safely during Covid-19
27 Jennifer O'Connell: For some people, home is the most dangerous place of all
28 Biker (24) dies after being thrown from scrambler
29 Belfast phone mast hit by arson after claims over 5G link to coronavirus
30 Are holidays booked for July and August going to happen?
31 Three held after South Armagh gang steals ATMs in Dundalk
32 Truck driver arrested after testing positive for cocaine
33 Two men who fled car involved in nationwide burglary spree arrested
34 Simon Zebo: ‘It’s been tough not being able to put my hand up to play with Ireland’
35 Matt Williams: The economic earthquake for European rugby is coming
36 Pope Francis: An icon of hope and solidarity in a time of crisis
37 Simple shakshuka: spice up your mealtimes with this Middle Eastern dish
38 We need to cancel the Leaving Cert and give students predicted grades
39 Coronavirus: What are the new nursing home measures?
40 Woman awarded €87,000 over trauma of seeing motorist’s partly decapitated body
Real news has value SUBSCRIBE