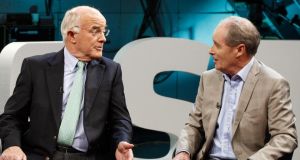 Remember After Dark, that late-night discussion programme on Channel 4 way back? The one that had no fixed end time, instead going on for as long as at least one guest on the couch was still awake, not entirely inebriated and had something to say. It was highly excellent.

You couldn’t but think after watching the latest instalment of Ireland’s Greatest Sporting Moment that it might be an idea for RTÉ to revive the format, with Ted Walsh, Ger Loughnane and Brian Kerr as the hosts. They shouldn’t be restricted to sport either. If they were on this week, for example, you could have them discussing the threat of an election with their chosen guests. The programme probably wouldn’t end until April.

It wouldn’t be without its legal risks, of course. Des Cahill opened last week’s show with an apology to Barry McGuigan after Joe Brolly and Eamon Dunphy had been quite rude about him and his career during the previous show. Next week Des will, more than likely, have to open with an apology to, among others, Russians and anyone from the former state of Biafra. The culprits this time around? Ted and Ger.

RTÉ, you’d imagine, had reckoned this would all be a bit of light-hearted fun and chat. Instead they’re possibly now fearing calls for a tribunal of inquiry to investigate comments made by their pundits in the course of the series, while at the same time being responsible for splitting a nation in a fashion not seen since the Civil War.

The split had largely been a sporting one until we got to the greatest moment of the 1960s and 1970s, at which point the inclusion of Dublin’s 1977 All-Ireland semi-final win over Kerry turned it in to a geographical one, 31 counties united in their displeasure over the Jackeens getting on the shortlist for nothing more than a semi-final triumph. And Ted stood firmly with them.

Des: “Did that match stand out for you?”

What about Don Givens’s hat-trick against the Soviet Union? Ted?

“It was the fact that Russia was coming … and they were after taking over half the world and we thought they were right so-and-sos. And the fact they were coming here with tea cosies on their heads and big woolly coats on them. And they were communists. And if you wanted to insult a fella you’d call him a commie that time. ‘Go ’way, you dirty communist.’ And at Mass that time on a Sunday, the priest would say at the end, ‘Would you say three Hail Marys so we can convert the Russians?’ They were aliens, and the fact they were coming over here to Dalymount Park in Dublin, you thought they were going to ate you. It’d be like the Taliban coming here now to play football.”

Ger then upped the chances of the Russian ambassador calling Liveline on Monday to incandescently talk to Joe.

“They all looked the same,” he said. “They all sounded the same. To me they sounded like the product of some mad scientist in Siberia because they had no flair, no name. Can you,” he asked Brian, “name any Russian fella who was playing that day?”

Brian could have named their eighth choice left-back given the chance, but Ted jumped in first. “Khrushchev!” By now, Brian had the look of a man who reckoned even dealing with the FAI was less challenging than this.

No Arkle in Drimnagh

Next, Arkle. Ted sat up straight, both eyes twinkling, but Brian wasn’t convinced by all this horsie business. “At that time, there wasn’t that much [talk] about Pat Taaffe and Tom Draper, ” he said.

Ted: “Jaysus, where were you living?”

Brian: “Drimnagh – and there were plenty of horses around our way.”

Next, John Treacy winning his second successive World Cross Country Championship in Limerick in 1979. “You’d definitely know he was on no steroids,” said Ted. “He was more like an ad for a Third World country; there wasn’t a pick on him … He was like a Biafran.” Des turned a whiter shade of pale.

And then the nomination that proved to be the winner: Munster beating the All-Blacks, ending football’s winning streak (Ray in 1988 and that 1990 penalty shoot-out). How great a day was it?

“Well,” said Ger, “we all know sports fans are inclined to exaggerate – but rugby fans bring it to a new level altogether.”

Do you see now why we need an After Dark with Ted, Ger and Brian? TV gold. Guaranteed. “Tea cosies on their heads and big woolly coats on them,” Ted would say of the Christmas election candidates calling at our doors. Like the product of some mad scientist in Siberia.