Wimbledon: Stars roll up to oversee their protégés 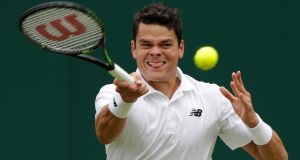 Former greats that still attract as much attention as the players limped and ambled around mentoring, coaching, consulting, tutoring.

There was Michael Chang all expressionless and shaded in wrap-around glasses trying hard to look warm. Looking on from the players’ box, Chang is now mentor to project 45 aka Kei Nishikori.

Nishikori was a “project player” patented and constructed in Japan with some help from the great Florida Academy once owned by Nick Bollitieri and now by the management company IMG.

The tennis boffins originally set Nishikori the task of reaching a ranking of 45 in the world. In a spectacularly over achieving experiment, he’s seeded five at Wimbledon and won his Centre Court match against Julien Benneteau in four sets 4-6, 6-4, 6-4, 6-2.

Chang may smile next week if his man makes it that far. That is the central part of this fortnight’s plan.

John McEnroe’s refrain when these things have come up before has been that the kids and the other jobs, such as commentating on matches for American and British networks, are too much.

Still, the former Wimbledon champion has teamed up with Milos Raonic, the Canadian player, whose hair refuses to move during play.

“We spoke the day before about my first match,” said Raonic of McEnroe. “Then he came out to practice today. We spoke today for this match. He was there with me this morning,” said Raonic.

“Obviously he’s trying to be there as much as he can. It depends what kind of commentating schedule he gets that day. For the first round, it worked out. Today it didn’t because I believe he was calling the first two matches on Centre Court.”

Ivan Lendl of course made Chang look like a laughing hyena. The granite-faced Czech and former Grand Slam winner is back with Andy Murray after Amelie Mauresmo bailed out after having a baby and bridling at the travelling.

Lendl gazed down from the players’ box expressionless. Not a twitch. Not a flicker of a read of what was going on in his head.

Murray, once again, caused his mentor no real need to become animated. Although the Scot dropped his first service game to hand Chinese Taipai’s Yen-Hsun Lu a break, he then flushed him out of the draw in one hour and 40 minutes, Lu falling to the principle of diminishing returns. The longer he was out there the less Murray gave him – 6-3, 6-2, 6-1.

Then there was Goran Ivanisevic. Still a little scattered looking but a soft shoulder for the fans to take selfies.

The goatee has a little more grey but no mistaking the big, loved Croat.Ivanisevic is in ninth seed Marin Cilic’s corner and yesterday watched as his man won 6-2, 6-7 (6), 6-4, 6-4 against Ukraine’s Sergiy Stakhovsky.

Stan Wawrinka and Roger Federer make returns on Friday and they too have former players taking up coaching roles, Federer with Ivan Ljubicic and his Swiss Davis Cup team-mate teaming up with Dutchman Richard Krajicek. Jobs for the boys?