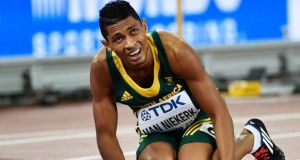 Wayde Van Niekerk of South Africa falls on the track after winning the men’s 400m final during the Beijing 2015 IAAF World Championships at the National Stadium. Photo: Franck Robichon/PA

Shortly after Van Niekerk crossed the line he required medical treatment beside the track. According to reports an ambulance was called as a precaution but was not required.

The 23-year-old South African went out hard and held on to win in 43.48 seconds. Merritt took silver in a personal best 43.65 seconds and James finished third in a season-best 43.78 seconds.

Merritt and Van Niekirk came off the final bend together but the experienced American faded along the home straight and finished just ahead of the advancing James in the first 400m race to feature three men running under 44 seconds.

“It was a special occasion,” James told the BBC after the race. “A once-in-a-lifetime race and I am glad to be part of a special group of 400m runners in this era.”

“There were a lot of fireworks in the final,” Rabah said afterwards. “I tried to come out and put in a decent performance but it was just beyond my reach. I will take that, go home and come back and cause some problems.

“It is quite an achievement for me to come here and make the final and run 44 seconds back to back, but I will come back stronger.”