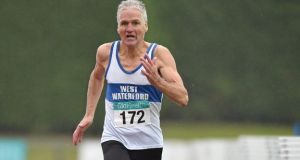 Joe Gough has been named World Masters athlete of the year.

In a first for Irish distance running, Joe Gough has been named World Masters athlete of the year, the icing on the already sweetly layered cake that was his 2018 season, both indoors and out.

With multiple European and World titles to his name already, Gough enjoyed arguably his best 12 months, the highlight being double gold in the over-65 division at the World Masters Athletic Championships in Malaga.

In his preferred event, the 800m, Gough ran 2:16.37 to set a new European record, before winning his first 1,500m world medal at the longer distance. He also completed a European Master indoor double in Madrid earlier in the year, and set an O/65 world record over 800m. The Dungarvan runner, who turned 66 last month, first took to the Masters competition in the O/45 division, showing no signs of slowing down in the years since.

“I’m flabbergasted, didn’t expect it at all,” Gough said of the award. “Of course the awards are nice, it’s great to be acknowledged, and I also feel it’s recognition for the Irish family of Masters athletics, a vast number of people, one of the biggest sporting memberships in Athletics Ireland.”

World Masters Athletics (WMA) is the worldwide governing body of the sport, for track and field, cross country and road: originally founded as the World Association of Veteran Athletes, in 1977, it became the WMA in 2001, and follows all the rules and event specifications of the IAAF, the governing body of world athletics

Gough was nominated for middle distance award having already won that category when named European Master Athlete of the Year in December: “After another excellent year in 2018, athletes from every discipline have once again shone high and bright, being a beacon for the world of Masters Athletics,” said WAM, the overall women’s winner being 75 year-old Canadian sprinter Carol LaFayette-Boyd, American sprinter Charles Allie, 71, the outright men’s winner.

Gough, who competes with West Waterford AC, also picked up the Masters Athlete of the year at the Athletics Ireland awards in January. The highlight of the year, he admits, was his double World gold, completing his unbeaten championship run of the year.

“I’d won the 800m before, but never the 1500m. I took a decision to train for it, go for gold, which was a big challenge, because I’m not really a 1500m runner. To win it and break the Irish, and also broke the European record to win the 800m, means the World Championships were very satisfying.

Next up is the World Indoor Masters in Torun, Poland at the end of in March, and later the European Outdoors in Venice in September. Last year’s World outdoors attracted some 7,000 athletes from 102 countries.