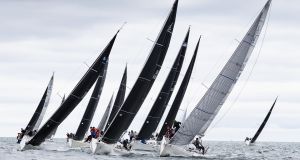 The Volvo Dún Laoghaire Regatta has a record entry of more than 500 boats. Photograph: David Branigan/Oceansport

With an unexpectedly fresh but welcome northwesterly wind, the 500-boat Volvo Dún Laoghaire Regatta breezed towards its halfway mark with clear leaders and overall favourites emerging in many of the 30-plus classes.

Richard Colwell and Johnny Murphy’s Outrajeous from Howth Yacht Club has edged into the lead in Division 1 having edged ahead of a pair of Dún Laoghaire challengers in the 26-boat class.

Séamus Fitzpatrick on Mermaid IV, also from the RIYC, leads the very popular Coastal fleet thanks to a second race win after a five-hour race on Friday. Thirty boats are contesting this class, making it a contender for the overall event trophy.

And Division 2 winner from the recent O’Leary Life Sovereigns Cup in Kinsale is also well placed on Dublin Bay as Manchester’s Nigel Biggs with Checkmate XVIII has opened up a seven-point lead over Miss Whiplash from the Royal Cork YC.

Racing continues on Saturday before concluding by mid-afternoon on Sunday.