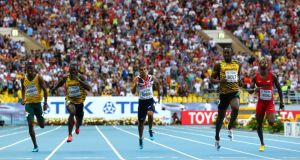 Usain Bolt stormed to 200 metres glory this evening to rack up an incredible 13th global gold medal — not that the Jamaican is counting.

Six days after winning the 100m, he retained the 200m title for a third successive World Championships with a 19.66 seconds run on the penultimate day in Moscow.

Bolt’s dominance shows no sign of abating and another victory in the 4x100m relay tomorrow will see him equal American legend Carl Lewis’ record of eight world gold medals.

“I haven’t really thought about that,” he said. “I’ve done a lot throughout the years. My main goal was to make myself a legend and I solidified that at London last year. I’m not really worried about winning medals and counting them. My next big goal is to go to the Olympics and do something that has never been done before — winning the 100m and 200m.”

Bolt was at his eccentric best as he came into this evening post-race press conference, greeting journalists with a royal wave. The 26-year-old looked typically relaxed as he spoke to the media, revealing his relief at overcoming compatriot and training partner Warren Weir to take the 200m crown.

“I love my 200 metres, everyone knows that,” Bolt said. “The pressure for me comes is always a bit different in the 200m. I’m always more nervous in the 200m because it means so much to me. The 100 is always for the fans, the people, to put on a show because it is the event everyone want to see, who is the fastest man in the world, to see who is the best.

The Luzhniki Stadium was tonight louder than it has been throughout the championships, thanks in no small part to more home success. Russia produced a world-leading run of 3:20.19 in the women’s 4x400m relay to pip United States to gold, while Svetlana Shkolina won the women’s high jump as much-fancied Anna Chicherova ended outside the medal spots.

A season’s best from Australia’s defending 100m hurdles champion Sally Pearson was not enough to stop Brianna Rollins of the United States.

Ethiopia’s Meseret Defar secured the 5,000m title she last won in 2007, sprinting away from her rivals to win in 14:50.19. Stephen Kiprotich of Uganda became just the second man to add a world marathon title to an Olympic gold, following in the footsteps of Ethiopian Gezahegne Abera.

Such success for East Africans in long distance running is expected, but there was also almost a shock medal for Kenya in the men’s javelin.