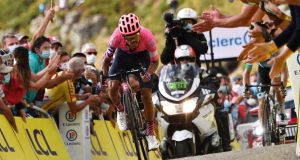 It was flagged as the most brutally hard if not quite the longest stage of this year’s Tour de France and, as if on cue, up rode Dan Martin to find out just how hard it was.

The Irish rider had clearly flagged this stage in advance too, a fractured bone in his lower back, sustained two weeks before the start of the race, demanding a cautious start; now was the time to put things to a full and proper test.

Only Stage 13, as it turned out, was brutally and crushingly hard in every sense, as Martin’s attempts to help bring an early breakaway all the way to the summit finish at Puy Mary Cantal, the highest pass of the Massif Central, gradually broke up itself over the final 50km and the Irish rider eventually finished 11th, still an encouraging ride with plenty more mountain stages to come.

“Taking today as a personal victory,” said Martin. “The result wasn’t what our ambition wanted but four weeks ago I could barely walk after fracturing my sacrum. Today I finally felt like I could push again. Hope to get the right break again soon.”

Timing his finish to perfection was Dani Martínez, the EF Pro Cycling rider from Colombia, who got past fellow breakaway rider Lennard Kämna from the Germany in the final 30 metres, after another early stage contender and his Bora-Hansgrohe teammate, Max Schachmann, fell away in the final 600 metres.

At one point Martin’s breakaway group had 10 minutes on the peloton, yet he ended up four minutes and 31 seconds behind Martínez. Stating in advance his intention to go for stage wins and not the General Classification, Martin’s 11th place also moved him up that leader boardby 12 places, and he now sits 46th overall, with the possibility of several more stage challenges ahead, his old form slowly but surely coming around.

That once large breakaway advantage was eaten away on the final climb too by most of the General Classification contenders, and none more ominously than yellow jersey wearer Primoz Roglic (Team Jumbo-Visma) and his fellow Slovenian rider Tadej Pogacar (UAE Team Emirates), who finished 12th and 13th behind Martin, both 6:05 behind the stage winner, and now move into first and second overall.

Defending champion Egan Bernal lost time, finishing 18th on the stage, 6:43 behind, which means Roglic now leads the overall race by 44 seconds from Pogacar, with Bernal third, 59 seconds behind.

“I felt good, actually, tried to do my best but they were stronger than me,” Bernal said of the Slovenian duo. “I could do nothing, but actually I was feeling good the whole day. We need to see what will happen in the next days I’m looking at my numbers and I’m doing some of my best numbers. If the others are stronger, I can do nothing. I don’t know, we will see what happens.”

Hopes of a French win had almost certainly disappeared too by the finish, as both Guillaume Martin (Cofidis) and Romain Bardet (AG2R La Mondiale) lost significant time, both conceding more than two minutes and slipping outside of the top-10 overall. Martin had started the day in third place, but lost 2:46 on the Slovenian by the finish, while Bardet dropped to 11th, losing 2:30, not helped by a crash with around 90km remaining, which later forced Bauke Mollema (Trek-Segafredo) out of the race.

At the start of the stage, the 1:42 the time difference between the race leader and the 10th on GC was the smallest at the start of stage 13 since the Tour de France resumed in 1947. The stage finished with 2:54 between the top 10.

Nicolas Roche, who had finished in 10th place on Thursday’s stage and helped Team Sunwen rider David Hirschi to the stage win, finished the stage in 95th place, 28:10 down, the seven climbs of the day clearly taking its toll.

Martin’s early breakaway was originally of five riders, and then increased to 18; he still rode aggressively throughout, seeking that third Tour de France stage, the last coming in 2018, when he won stage 6 onto Mûr-de-Bretagne, the Alpe d’Huez of Brittan. At the finish here, however, the stage belonged to Colombia and Slovenia.

Sam Bennett continues to lead the points classification with an advantage of 66 points over Peter Sagan, both riders not in contention for any intermediate or finish points on what was the most brutally hard stage so far.

For much of the stage, wearing the green jersey for the sixth time so far in all, Bennett was more concerned not dropping off the very back of the pack, before happily rolling home last of the lot in 159th, 34:21 down, duly accompanied by his Deceuninck-Quick Step team mates Michael Morkov and Tim Declercq, these brutal stages for the Irish rider all about surviving, and retaining his green jersey. So far, so good.

The Tour now heads into two more equally tough back-to-back mountain stages, and it still hasn’t reached the Alps. Saturday’s Stage 14, from Clermont to Ferrand-Lyon, is 197km, a second category climb after 68.5km likely to see off many of the sprinters, while Sunday’s Stage 15, the 175km from Lyon to Grand Colombier, has one of the toughest uphill finishes of the Tour on a super-steep climb in the southern Jura.