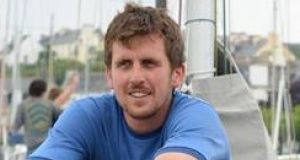 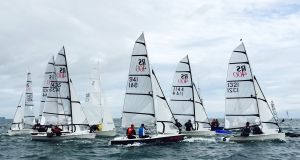 Co Meath’s Thomas Dolan lies in the top half of the Mini Transat îles de Guadeloupe fleet after Sunday’s start from Douarnenez, France.

The solo rookie sailor – and only Irish entrant in the race – has typically made gains overnight on his mid-fleet position in the first five days of the race and spent yesterday maintaining 18th overall from 44, just over 100 miles off the overall leader.

The solo transatlantic yacht race started in France and ends in Pointe-a-Pitre, Guadeloupe, in the Carribbean, covering over 4,000 miles with a stop in Lanzarote in the Canary Islands. The ocean race is significant because of the very small size (6.5 metres) of the competing yachts and the extent of the race.

It’s very early days in this marathon voyage but the opening performance against some of France’s top sailors in this discipline represents a promising start in a borrowed boat.

He first set sail on the local lake in Co Meath aged 10. Starting “at the bottom” he worked with Glenans sailing school,which gave him access to bigger boats as well as the open ocean. He has been working professionally in sailing since 2007, in Ireland, France and the Caribbean, accumulating over 10,000 miles at sea.

A Co Down small boat sailor is targeting Tokyo as part of a global Finn team. Oisin McClelland literally outgrew hopes of racing lasers on the world stage, but the Donaghadee solo sailor has found the Finn – the Olympic heavyweight men’s dinghy – ideally suited to his “rugby” frame, and the class’s international body is now backing him – through an innovative crowdfunding scheme – to go for gold at the Tokyo 2020 Games.

RS class official David Cheyne of Belfast says last weekend’s double-handed RS400 National Championships was “refreshing” because there has been “so much concentration on single-handed racing” in recent years. “It is such a refreshing sight to see 50 dinghies in a single class with jibs and kites whizzing about,” he says.

The largest RS400 Irish fleet of the summer turned out at Ballyholme Yacht Club but the title went abroad to travelling English champions Mike Sims and Richard Brown.

Overall 2015 Irish Sea offshore honours went down to the last race with Dún Laoghaire’s defending champion, the J109, “Ruth” skippered by Liam Shanahan and Welsh J125, “Jackknife” (Andrew Hall) only a half point apart after a 13-race series.

As it turned out, Shanahan’s smaller J boat had the edge in the final 74-mile climax from Dún Laoghaire to Pwllheli, enabling the National Yacht Club crew to retain the ISORA crown.

1 Cian Healy: ‘Realistically I got away with murder when I was younger’
2 Seán O’Brien: Anger over my parents’ break-up never left me
3 Barcelona president Josep Maria Bartomeu and board of directors resign
4 Gerry Thornley: Antoine Dupont and France look perfectly primed for Ireland visit
5 Johnny Sexton: ‘We just know we have to be a lot better in all areas on Saturday’
Real news has value SUBSCRIBE