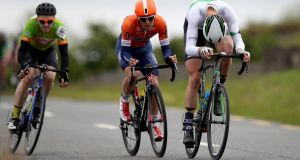 Delta Racing’s Jan Willem Van Schip on his way to winning the second stage of The Ras. Photograph: Inpho

Asked to explain the circumstances of his win on stage two of the An Post Rás, his response was short. “I just rode really fast . . . that is how it happened.”

The answer was delivered with a smile, and wasn’t intended as being glib. He opened up more when asked if he was confident he would hold the peloton off. “No,” he laughed. “I was shouting at myself, ‘come on! Go this far, just one kilometre more. One kilometre more . . . ’”

The image of a rider roaring at himself might appear humorous but it worked for the Netherlands Delta Cycling Rotterdam competitor, who hit the finish line seven seconds clear of Christopher Latham (Britain Team Wiggins) and the rest of the main bunch.

The 142.9 kilometre stage from Longford was marked by a huge number of attacks and short-lived breakaway attempts, as well as a big move containing 30 riders which was stopped by a level crossing after 102 kilometres of racing. UCI rules state that such circumstances should usually result in a restart with the same time gaps that were in place before the incident, but as things were so tight at that point this did not happen.

These opened a lead of one minute, causing panic for race leader Nicolai Brochner Nielsen, his Denmark Riwal Platform Cycling team and the peloton, and leading to an increasingly frantic chase. When the gap plummeted to 18 seconds with eight kilometres to go a bunch sprint seemed the most likely outcome, but Van Schip had one more card to play.

“I had already felt that I was the strongest in the break,” he told The Irish Times, “because some of the guys weren’t working all the time. I just waited for the wind when we turned in the other direction.”

He then attacked hard and gave it everything. In this case, that proved to be more than enough and he held off the main bunch into Newport, landing an impressive win.

The Italian Matteo Cigala’s fourth place for Cork Aqua Blue Sport made him best of those racing on an Irish county team, while Robert Jon McCarthy’s eighth place finish was the top result by an Irishman.

Brochner Nielsen said the day was a nervous one. “It was super hard and really difficult to control with only four of us. We lost one guy pretty early due to illness.

“It was hard, we had to work but we kept the jersey. That was the main goal, so we are pretty happy.”

He said that the break caused a big scare. “I was worried more than once today. But we just kept to the plan. We tried to bring it back and thankfully we managed to get the gap down to less than what it was, in terms of a time advantage.”

The race continues Tuesday with a 149 kilometre stage to Bundoran.