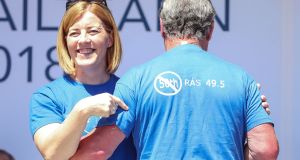 Eimear Dignam: “We keep pushing out the final decision, but I don’t know how much longer I can hold out.” Photograph: Bryan Keane/Inpho

There is still no clear picture as to whether this year’s Rás Tailteann will go ahead as before, with race organiser Eimear Dignam remaining in limbo in relation to sponsorship of the race.

Dignam has been in negotiation with two companies in recent months, and while she hoped a final decision would be reached in early January, she is still waiting for a final decision from one of those.

She updated the situation with The Irish Times on Thursday, revealing there was just one sponsorship possibility left at this time.

“This week the American company we were speaking to has withdrawn its interest,” she said. “The section of the company that was looking at backing the race was a startup planning to launch a new product in March. We may have been six months too early with that. I think they may have needed more time to be in a position to back the event.”

The second company she has been speaking to is based much closer to home. “The proposal to the Irish company is still with the chief executive. It is being chased up by the contact I am dealing with within the company. They are both at a conference this week, and I am hoping they will meet and reach a final decision.”

Dignam and her team would normally be working on the race for several months by now. The race’s long-running sponsorship deal with An Post ended after the 2017 edition, and while it was able to be run on a reserve fund last year, the event does not have enough finances to repeat that in 2019.

“We keep pushing out the final decision, but I don’t know how much longer I can hold out,” she said, while saying she remains hopeful that the Irish company will give a green light.

“At this point in time a race that usually takes 10 months to organise has just four months to get everything together. That said, the timeframe is less an issue for us than the guys who are training for it. If we get the money, we can organise it, but we need a final decision soon.”

Dignam said that she was hoping to announce the race’s position by the end of next week. “We will have to get a yay or a nay very soon, or at least a much more positive indication from the company to work with.”