Steelers leave it late to beat Bengals in ill-tempered match 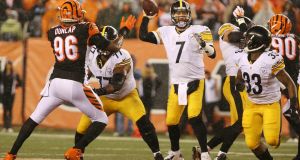 The Pittsburgh Steelers secured a last-ditch 18-16 victory over bitter rivals the Cincinnati Bengals on Saturday, coming out on top of an ill-tempered AFC wildcard game to extend the home team’s long wait for a playoff win.

The contest seemed to be safely in Cincinnati’s hands after they fought back from a 15-0 deficit with 16 fourth-quarter points and seized control of the ball with less than two minutes remaining on a Vontaze Burfict interception.

However, as the Bengals endeavoured to run out the clock and secure a first playoff victory since 1991, running back Jeremy Hill fumbled after a hit by linebacker Ryan Shazier and the Steelers recovered deep in their own territory.

Inspired by quarterback Ben Roethlisberger’s return to the game after he was earlier withdrawn with a shoulder injury following a bone-jarring sack, Pittsburgh marched down the field.

In the dying seconds, the Steelers benefited from a pair of personal foul calls, a ferocious late hit to the head by Burfict on an incomplete pass to Antonio Brown and another 15-yard foul on cornerback Adam Jones in the ensuing melee.

That set up a game-winning, 35-yard field goal by Chris Boswell with 14 seconds left.

When asked about his shoulder, the quarterback said: “We got a win, that’s all that matters.”

The Steelers were the second visiting team to win on the opening day of the National Football League playoffs following a 30-0 rout by the Kansas City Chiefs over the Houston Texans that set the AFC match-ups for round two next weekend.

The Chiefs used a dominating defence and workmanlike offence to crush the mistake prone Texans.

The Chiefs, who stormed into the playoffs on a 10-game winning streak, got the AFC Wild Card contest off to an explosive start when Knile Davis returned the opening kick-off 105 yards for a touchdown to send a jolt through the capacity crowd at Houston’s NRG Stadium.

The second longest kick-off return in NFL playoff history would stand up as the only touchdown of the first half with Brazilian kicker Cario Santos adding two second-quarter 49-yard field goals.

“You never expect to start a game like that,” said Chiefs quarterback Alex Smith. “But we feel like we can play three phases of football and special teams really came out today and gave us a kick start.”

The AFC South champion Texans were fortunate to escape a mistake riddled opening half trailing just 13-0 after turning the ball over four times.

Brian Hoyer’s first post-season appearance was not a memorable one as the Houston quarterback fumbled once and tossed three interceptions in a miserable opening half, including one with the Texans on the two-yard line and poised to score.

Kansas City pushed the Texans into an even bigger hole when Smith marched the Chiefs 94 yards on their opening possession of the second half, hitting Chris Conley with a nine-yard touchdown strike to cap the drive.

There was more bad news for the Texans in the third quarter when team leader JJ Watt, the NFL’s reigning defensive player of the year, left the field with an apparent leg injury and did not return.

Texans fans were headed to the exits after Spencer Ware scampered for another touchdown on the first play of the fourth quarter that capped another long drive and put the Chiefs out in front 27-0 before Santos closed out the scoring with his third field goal of the game.

Smith, taken by the San Francisco 49ers with the number one overall pick in the 2005 draft, was not spectacular but was his usual efficient self, completing 17-of-22 passes for 190 yards, a touchdown and his first interception in four playoff contests.

“There were a lot of unknowns, it’s been a long time since the last time we played them and we were just trying to see how they would treat some of our formations and I think we got that ironed out at half-time,” said Smith, explaining why it took a half for the Chiefs’ attack to get in gear.

“We’ve got high character guys who have put in the time and sacrifice.”

Hoyer’s final stats made for horrific reading as he completed just 15-of-34 passes for 136 yards and was picked off four times.

Áine O’Gorman comes out of retirement to answer Ireland’s call 18:07
McNamara makes four changes to Ireland U20 side for England clash 17:44
Rory McIlroy rules out taking part in Premier Golf League 18:17
America at Large: Jimmy Conway’s legacy marked from Cabra West to Portland 17:15
Scotland make three changes for trip to Rome to face Italy 15:58
Here is your handy guide to sport on television this week