Sonia O’Sullivan may be awarded medals after Chinese drug revelations 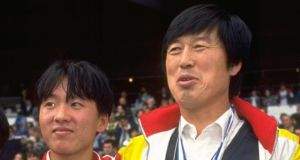 They say the truth always come out in the end, and perhaps the only surprise about the cold truth now emerging about the notoriously dominant Chinese women’s distance runners of the early 1990s is that it took so long.

Not too long for Sonia O’Sullivan, perhaps, who may be in line for a much-belated World Championship gold medal – possibly even two – after being originally run out of the gold medal positions by those Chinese runners over both 3,000m and 1,500m at the 1993 World Athletics Championships in Stuttgart.

Better known as “Ma’s Army”, given they all trained under the deeply regimental coach Ma Junren, they first came to prominence at those 1993 Championships in Stuttgart: O’Sullivan was run out of all three medals by three Chinese women in the 3,000m, finishing fourth, before bouncing back to claim silver over 1,500m, again behind another Chinese women.

However it now appears likely those names and titles will be stripped from the record books. According to Chinese state media reports, all nine of Ma’s Army were forced to take “large doses of illegal drugs over the years”, according to one of the most prominent of those runners, Wang Junxia – who won the 10,000m in Stuttgart, and also the gold medal over 5,000m at the 1996 Olympics in Atlanta, where O’Sullivan was forced to drop out.

Junxia has detailed the regime of state-sponsored doping in a letter, according to reports, including the South China Morning Post. The letter was signed by all nine team-mates.

The IAAF, the governing body of world athletics, has already announced its intention to pursue the implications of her admission, by verifying the letter, which, if proven to be from the runners, will potentially have consequences for their records and medals.

According to IAAF media spokesman Chris Turner, the organisation would seek to authenticate the letter. “The IAAF’s first action must be to verify that the letter is genuine,” said Turner. “In this respect, the IAAF has asked the Chinese Athletics Association to assist it in that process.”

The letter was also published on Tencent Sports, and the South China Morning Post reports that it was originally penned two years after Junxia set two world records in the 3,000 and 10,000 metre races – marks that stand today.

However, Junxia wrote about how the women on the team tried to avoid the state-run doping regime by quietly throwing away pills forced on them. But she said the coach Junren would personally inject the drugs into his athletes.

The letter was sent to a journalist named Zhao Yu, but it remained unpublished for 19 years. According to IAAF competition rule 263.3, if an athlete makes an admission of guilt then the Association can “take action” – and with that perhaps clearing the way for O’Sullivan to be retrospectively awarded another two World Championship gold medals, to go along with the 5,000m gold she won in 1995

“We are humans, not animals,” said the team members in one passage. “For many years, [he] forced us to take a large dose of illegal drugs. It was true...”

“Our feelings are sorry and complex when exposing his [Ma’s] deeds,” the letter continued. “We are also worried that we would harm our country’s fame and reduce the worth of the gold medals we have worked very hard to get.”

Junxia was recently honoured with a place in the IAAF Hall of Fame for her “notable” achievements in 1993, when she set records in a bouquet of championships held in Tianjin, Stuttgart and Beijing. She retired from athletics in 1997.

According to World Anti-Doping Agency rules, Junxia’s admission could also carry retrospective penalties such as disqualification of results, the imposition of a period of ineligibility, mandatory publication of the violation and financial sanctions.

Junren always claimed the success of his women was based on their intense training regime in the Tibetan alps, a ban on long hair and dating: he also hailed Chinese women’s perceived capacity for “eating bitterness” and that his exotic elixers of “turtle blood” and “powdered seahorses” given to his runners were behind the track success, and has consistently denied the use of performance enhancing drugs.

Still, many believed the only answer was performance enhancing drugs. Junxia broke three world records in three events consecutively over a range of distances: her 8:06.11 for 3,000m and 29:31.78 for 10,000 have been effectively untouchable in the 23 years since; indeed she took nearly 42 seconds off the 10,000m. The previous world record was held by Norway’s Ingrid Kristiansen, who ran the Bislett Games 10,000m in Oslo in the time of 30:13.74.

1 Ireland 23 Georgia 10: How the Irish players rated
2 Ireland grind their way to grisly win over Georgia
3 No fireworks but Limerick get the job done against Galway
4 Ireland’s autumn of discontent continues with abysmal Georgia showing
5 Jim McGuinness: There is a way to save championship and make it competitive
Real news has value SUBSCRIBE