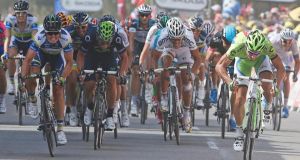 Simon Gerrans of Orica GreenEdge won the third stage of the 100th Tour de France in a sprint finish in Calvi as Peter Sagan settled for second for a second day running.

The Australian Gerrans beat the Cannondale rider by the narrowest of margins at the finish line after timing his break perfectly to the finish. Movistar’s Jose Rojas was just behind in third while Michal Kwiatkowski, wearing the white jersey of the best young rider, beat BMC Racing’s Philippe Gilbert to fourth.

It was a first Tour stage victory for Orica GreenEdge, who made their Tour debut last year, and some good news after their team bus struck the gantry at the finish line to cause chaos on the opening day of this year’s race.

There was some consolation for Sagan, who wrestled the points leader’s green jersey he won last year from the shoulders of stage one winner Marcel Kittel thanks to another second place.

The sprint finish came at the end of another tough stage as this year’s Corsican start to the Tour continued to challenge a battered and bruised peloton, still hurting from Saturday’s chaos in Bastia.

For the third day running there was a long breakaway but after they were reeled in on the last of the four categorised climbs on the road north from Ajaccio, the sprint teams began lining up and contained two late attacks to keep their men in position.

Missing from the battle, however, was Britain’s Mark Cavendish, who finished more than 17 minutes down on the riders on yesterday’s brutal stage and was again struggling to keep up today.

Jan Bakelants, yesterday’s surprise winner, will keep the yellow jersey heading into tomorrow’s team time trial in Nice after finishing in the peloton, credited with 19th place on the day.

Ireland’s Nicholas Roche and Daniel Martin finished in the main group on the stage and remain in 11th and 59th place overall.

On a day of unrelenting hills, with not a single stretch of flat road on the entire route and barely any more ground covered in a straight line, Lieuwe Westra (Vaconsoleil) led out an early breakaway, joined by Europcar’s Cyril Gautier, Orica GreenEdge’s Simon Clarke, Alexis Vuillermoz of Sojasun and AG2R La Mondiale’s Sebastian Minard.

Although Minard took the intermediate sprint, it was Clarke who was taking the initiative on the climbs as he looked to take the King of the Mountains’ polka-dot jersey from Gautier’s team-mate Pierre Rolland.

He pulled level in the standings by cresting the first three climbs of the day in first place but by the time they reached the Col de Marsolino, 13.5km from the finish, his legs were going and as the peloton closed, Rolland struck to move to the front and keep the maillot a pois rouges.

As they approached Calvi, Sylvain Chavanel (Omega Pharma-Quick Step), Lars-Peter Nordhaug (Belkin) and Euskaltel Euskadi’s Mikel Nieve burst forward to join Rolland, but they were soon swallowed up. The same went for Argos-Shimano’s Tom Dumoulin, who went off the front inside the final two kilometres but did not have the legs to survive and was caught on the final approach to the line.

The tough route took its toll on the field. Astana’s Andrey Kashechkin became the first man to withdraw from this year’s Tour as he pulled over 15km into the stage, and Yoann Bagot of Cofidis would follow around 60km later.

Team Sky’s Geraint Thomas, riding with what was diagnosed last night as a fractured pelvis sustained on Saturday, was undeterred, even if he would finish 177th on the day, leaving him 194th out of 196 overall.

The teams will head for the French mainland and tomorrow’s team time trial in Nice with no real moves yet made in the general classification battle as all the contenders once again finished in the peloton to remain level on time, just one second off first place.